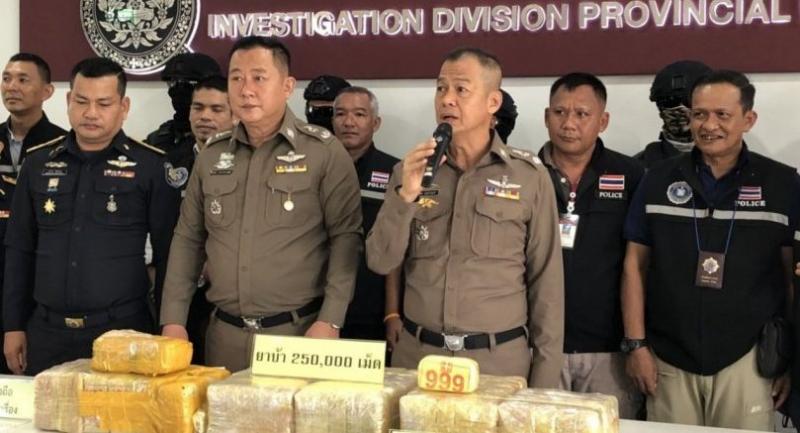 Police arrested two 40-year-old men and seized 250,000 methamphetamine pills during a raid carried out at the weekend.

Senior police officers made the announcement on Tuesday during a media conference at the Phuket Provincial Region 8 headquarters, based in Mai Khao.

Manasae “Sae” Toebu and Hama “Ma” Lasae, both from Yala, were taken to Sai Khao police station in Krabi, where they were charged with possession of a Category-1 drug with intent to sell.

Their arrest came after police received a tip-off that drugs were being transferred at the Ton Palm Resort in Krabi last Saturday.

A team of police officers were waiting at the resort until 2.30am.

They watched as a Toyota Camry entered the resort and parked in front of Room 12. Police then raided the room and found the two suspects with a stash of drugs inside three sacks.

Police said Manasae admitted that he had received an order from Abdullah Damae, who lives in Bannang Sata in Yala, and who drove the Toyota Camry to pick up the drugs in Krabi. Manasae was to get Bt100,000 after delivering the car, with the drugs, back to Abdullah.

He said he had no knowledge of the number of drugs involved and was not familiar with the route he was travelling, according to police.

He had therefore asked Hama to go with him because he was more familiar with the route.

Manasae told Hama that he would give half of his earnings to him, he told police.

The two suspects have transferred drugs twice before, the first time in April this year when they transported drugs from Nakhon Si Thammarat, police said at the press conference.