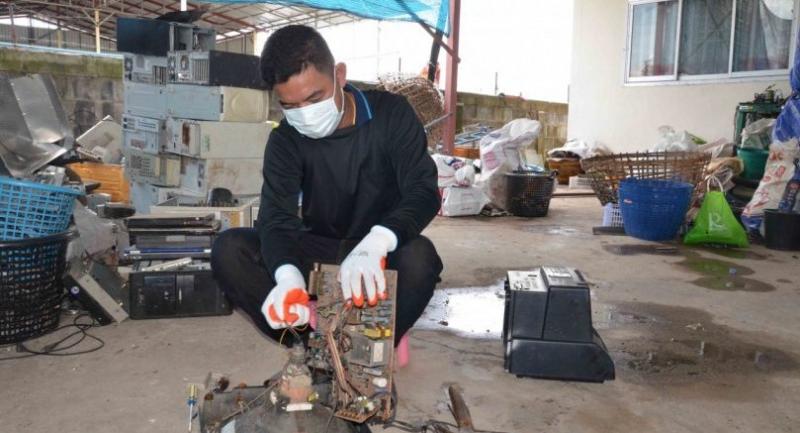 A resident of Tambon Khok Sa-ard in Kalasin’s Khong Chai district separates electronic garbage at his home, which is common practice of many scavenger families in this |sub-district’s 12 villages.

People in the three northeastern provinces of Kalasin, Ubon Ratchathani and Buri Ram were at risk of harm from electronic garbage as many families there were involved in trash processing and disposal – often without protective gear – due to the lure of high monthly incomes, Department of Disease Control director-general Dr Suwanchai Wattanayingcharoen said. Kalasin Governor Kraisorn Kongchalard, meanwhile, instructed officials to provide information about proper disposal and to inspect electronic garbage handling at Tambon Khok Sa-ard of Khong Chai district after a report that more than 1,200 tonnes of electronic trash went into the area per month – or over 20,000 tonnes a year.

Khong Chai district chief Prasut Hombanterng said Tambon Khok Sa-ard had 12 villages where the majority of residents went around buying second-hand items and garbage from across the country, especially electronic appliances, for processing, not imported garbage. The 1,200-tonne monthly figure comes from these 12 villages plus several other places [focusing on old machines and motorcycle parts] in Tambon Noen Silalerngm, he clarified. Citing the DDC survey at Khong Chai two years ago, Suwanchai said the big pay cheques prompted many villagers and their relatives in Ubon Ratchathani and Buri Ram to do scavenging. “But they don’t use gloves for protection when separating and processing electronic garbage for sales to business operators ... All adults and kids in these families are most of the time amid electronic trash – whose unsold parts were piled up and burnt there... this is dangerous,” he told reporters during the launch on Tuesday of a World Environment Day campaign to curb plastic garbage.

The department has implemented measures to check if anyone was sick to offer treatment; to put in place a system to monitor those at risk (people whose homes were scavenger business sites, especially small children); to enforce the Public Health Act 1992-backed regulation requiring scavenging businesses to dispose of garbage properly by digging up a standard-sized garbage-burying hole with plastic sheets laid at the bottom and around to prevent leakage, he said. Electronic trash has heavy metals such as lead and cadmium that could cause acute poisoning when exposed in large amounts, or cause health problems when exposed in small amounts for a prolonged period, said DDC expert Dr Somkiat Sirirattanapreuk.

Khong Chai so far has not reported any chronic case related to the activity, but the authorities and target communities have been warned to monitor for impacts – especially children’s development. Somkiat agreed with Suwanchai that the three provinces were at risk and said a detection for lead contamination will be added to this year’s blood test and physical check-ups for at-risk villagers.

Meanwhile, Chachoengsao province was proceeding with legal action against two factories, built for processing and disposing industrial garbage, said provincial governor Suwit Khamdee in a letter issued yesterday to update the public on the progress by a multi-agency working team for regulating industrial plants and tackling issues affecting residents. Citing the team’s inspection on Tuesday, he said the factory of He Jia Enterprises Co Ltd in Tambon Tha Than, Phanom Sarakham district, had not yet obtained a factory licence but it had already brought in materials and workers – both beyond legal limits – to do the work. Hence the provincial industrial office would proceed with legal action accordingly, while Tambon Tha Than would file a police complaint against its alleged illegal building modification.

The team also recommended that the factory of JPS Metal Group International Co Ltd in Tambon Koh Khanoon, where the team did not find any worker or machine, should be closed by the authority. This was because its registered activity of separating and extracting metals from electronic appliance garbage could cause pollution, affecting nearby residents and the environment in a long term, the letter said.