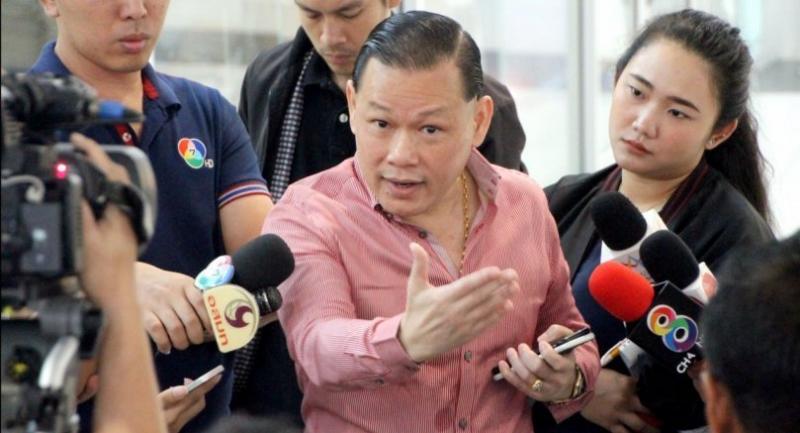 A former Special Branch deputy superintendent who now works for a company that runs a recently raided market was on Thursday indicted by the Don Muang Sub-district Court’s public prosecutors.

Pol Lt-Colonel Santhana Prayoonrat, a former deputy superintendent at the Special Branch Police Division, has been charged for allegedly insulting and obstructing on-duty police officers, according to the court's special prosecutor Photchanart Leungprasert.

Meanwhile, speaking to reporters about a related case in which he is accused of extortion, Santhana on Thursday said he would revive a bribery case involving two senior policemen who currently serve in key positions on the force. Santhana maintained his innocence in the obstruction case as he presented himself to the court for the prosecutor's indictment at 10am. He was granted a Bt15,000 bail release and the judge set the evidence-review session for August 6.

The charges relate to Santhana’s alleged confrontation with a senior police officer as the latter led a team to scour the Donmuang Modern Market in the capital’s Don Muang district. The raid was the first of a series of market searches for illegal or substandard skincare and food supplement products and formed part of a larger investigation.

Santhana, as an adviser to the market operator, allegedly tried to prevent police from conducting an in-depth search, saying that they would affect the market’s operations.

The operation at the 18-rai (2.9-hectare) market lasted several days before wrapping up on May 7, and led to more than 300,000 items of allegedly substandard products being seized.

The searches also led vendors to complain to police about having to pay protection fees starting in April 2016 to an extortion gang that they alleged was linked to Santhana. This led to the court on May 11 issuing an arrest warrant for Santhana and 10 subordinates on extortion charges, a police commando raid of Santhana’s condominium that failed to catch him on the same day, and his surrender to police to face the accusation the following day.

Santhana was granted a Bt300,000 bail in the extortion case. Referring to that case, Santhana told reporters outside the court on Thursday that in retaliation for the extortion accusation, he would he would revive a bribery case involving two senior policemen who currently serve in key positions on the force.