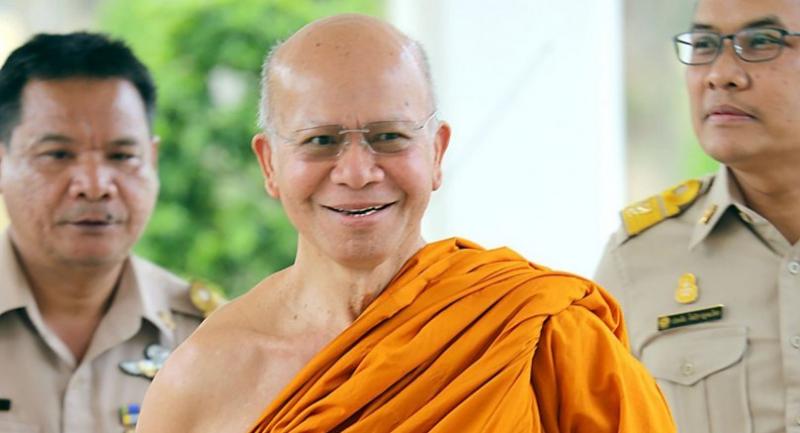 The suspects were identified as Sasi-orn Jeamwijitkul, Phirawat Srisattha, Jantana Rattana, her daughter Kittima and her son. Jantana is a Laotian and so are her children.

Phra Prommedhi reportedly escaped Thailand via the Nakhon Phanom border province into Laos. From there, he headed to Cambodia and Vietnam before boarding a flight to Qatar and then to Germany. He was apprehended as he tried to pass through immigration control at a German airport, but he has not yet been handed over to Thailand.

The monk – now known as Chamnong Dhammajari – has been stripped of all monastic ranks over allegations that he embezzled state funds for temples.

Before the allegations surfaced, he was an assistant abbot of Samphanthawongsaram Temple, a member of the Sangha Supreme Council and holder of the prestigious ranking of Phra Phrommedhi. He is one of several high-ranking monks, including Sa Ket Temple’s former abbot Phra Phromsitti, to be defrocked and detained at the Bangkok Remand Prison.

A source familiar with the ongoing investigation said irregularities were detected at about 30 more temples.

“Most these temples are located in the North and the Central regions,” the source said.

The ongoing investigation suggested more NBO officials might have been involved in corruption, with the most common pattern of irregularities suggesting that senior monks or NBO officials played a key role in the embezzlement, according to the source.

“They would pay out money first and ask that some portion of the amount be returned,” said the source.

Evidence gathered so far suggests some monks might have engaged in embezzlement on their own without the knowledge of others, the source added.

Regarding the case against Phra Khru Kittipatcharakhun, the monastic chief of Phetchabun’s Chon Daen district, the source said he had contacted more than 10 temples to hand out the funds and then asked that money be wired to his bank accounts.

The CCD is now planning to ask for the custody of four former senior monks, including the former abbot of Sa Ket Temple, because these four were also wanted in money-laundering cases it is investigating.