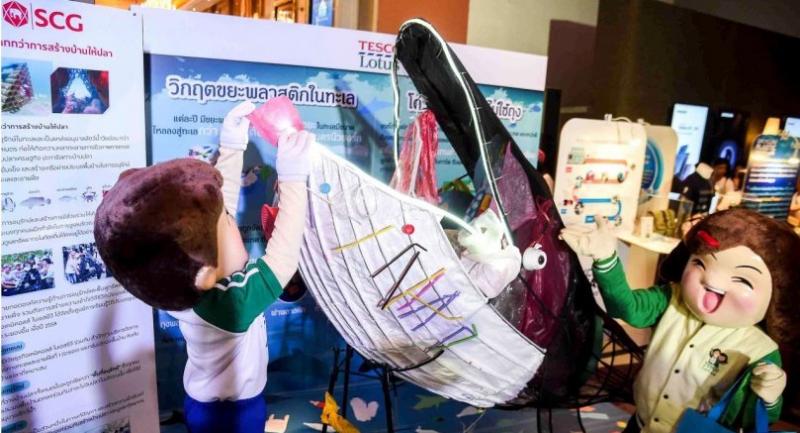 THE SURVIVAL OF rare marine species in Thailand is seriously threatened, as shown by the dwindling overall population of endangered animals such as sea turtles, dugongs, and whale sharks in recent years.

On World Ocean Day yesterday, experts identified plastic pollution and unsustainable fishing as the major reasons for the rapid reduction in the number of these endangered marine animals. There was an uproar after recent media reports of the tragic deaths of some animals due to plastic pollution.

The Thai government is investing Bt1.2 billion on a five-year plan to tackle marine waste problems and save rare marine species from extinction within a week of the death of a pilot whale in Songkhla province after swallowing eight kilograms of plastic bags. The death made global headlines and also rang alarm bells on the seriousness of the threat of plastic pollution.

On Thursday, a green turtle died due to marine debris in Rayong. A team of veterinarians found that it had consumed large quantities of plastic waste and other garbage, which clogged its digestive system and led to its death. “Death from consuming plastic is tragic and agonising for marine animals. These animals are not dying instantly, but it causes sicknesses, bringing about a slow and painful death,” Nantarika said.

She said plastic waste in the sea is one of the main threats to many marine species, especially sea turtles. Plastic is very similar to jellyfish in the eyes of these animals, so they end up consuming plastic, which eventually leads to their death.

“In most cases that we have seen, the animals’ stomachs were full of garbage, because plastic disrupted food absorption and made them eat more and more plastic,” she said.

“Death was caused not only by plastic clogging the digestive system, we found that in many cases the enzymes in the animals’ stomach digested plastic and released toxic chemicals, causing the animals to die from chemical toxicity.”

Nantarika stressed that the problem of plastic waste was a result of human activities. She warned that extinction of many marine species would be inevitable unless swift action was taken to prevent and tackle plastic pollution in the ocean.

Data from the Department of Marine and Coastal Resources (DMCR) revealed that during the five years from 2009 to 2014, the number of dugongs in Thailand had reduced from 240 to 200, while the number of sea turtle nests had declined rapidly from 502 to 329. Another set of data from DMCR showed that some 33,900 to 50,000 tonnes of plastic waste from Thailand ended up in the sea every year.

The threats to the survival of rare marine animals in Thailand and the severity of plastic pollution have not been ignored by the authorities, Thon Thamrongnawasawat, a national reform and strategy committee member and leading marine biologist, insisted. He revealed that the government had already allocated Bt1.2 billion for a five-year plan to deal with these urgent issues in the national reform plans.

Thon said under the five-year plan to tackle plastic problems in the sea, the government would invest Bt120 million to establish a Marine Debris Disposal Centre to clean up plastic waste from Thai waters with an annual budget of Bt20 million in the first five years.

The government also had allocated Bt360 million for academic research and campaigns on tackling plastic waste, he said.

Meanwhile, Bt620 million will be spent on efforts to save and study endangered marine species and fund the work of veterinarian teams.

“The government is investing such a large sum of money in order to achieve two challenging goals – of reducing marine debris by 50 per cent within 10 years, and increasing the survival rate of stranded marine animals by 90 per cent,” he said.

“These efforts are proof that the authorities are taking these problems seriously, so we urge everyone to work together on these efforts to keep our sea clean and preserve our endangered marine animals.”