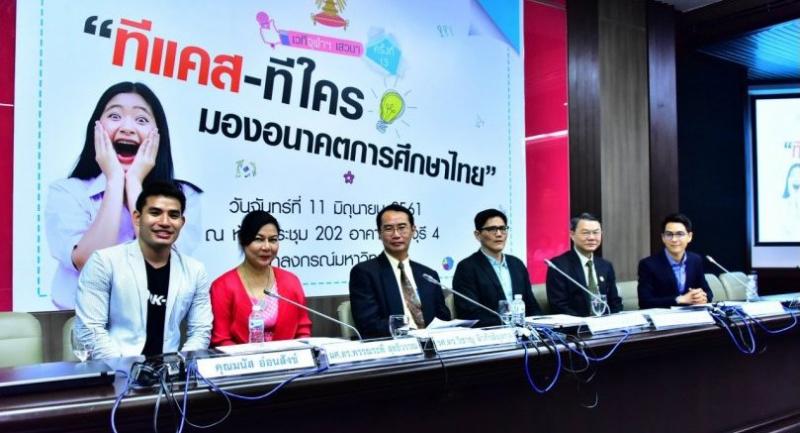 USED FOR the first time this year, the Thai University Central Admission System (TCAS) is proving great in theory but flawed in practice.

“Once implemented, we have seen its many problems,” Manas Onsang, educational-news editor of the popular dek-d.com website, said at a seminar this week.

The seminar was held at Chulalongkorn University (CU) to discuss the future of TCAS.

Never before has Thailand’s central university admission system attracted such harsh and widespread criticism, and never before has the system been altered while it is in the process of recruiting students for the upcoming academic semester.

Due to strong protests from students, the Council of University Presidents of Thailand (CUPT) added round 3/2 to TCAS late last month.

The 3/2 round offers those seats given up by higher-education institutes’ most successful candidates in the third round of TCAS to the next-best candidates.

Yet even with the extra 3/2 round, complaints are still mounting.

CUPT secretary general Prasert Kanthamanon, explained at the seminar that TCAS was designed to solve problems associated with the old university admission system.

After being in place for decades, entrance exams became so stressful for university applicants that authorities believed changes were necessary.

In the hope of reducing students’ need to attend cram schools and to address gaps between urban and rural children, the new central university admission system was introduced in 2006.

In 2010, the General Aptitude Test (GAT) and the Professional Aptitude Test (PAT) joined the set of criteria. To ease students’ stress in sitting the exams, many rounds of GAT/PAT were available. Students could then choose the best scores in their applications to universities.

There were also problems of some schools deliberately inflating their students’ grade point average and of students’ preparing for admission several times as direct university admission became widespread.

This year, TCAS has become one of the hottest topics among students.

TCAS features five rounds. Those who have already got a seat in an earlier round of the system cannot move to the next round.

The first round selects applicants solely based on their portfolios.

The second round involves quota seats for specific groups of students, such as sports talents or those living in the chosen institute’s home region.

The third round relies on scores from exams held at the same time by higher-educational institutes.

The fourth and the fifth rounds will take place with different criteria. “Critics say TCAS has allowed some students to block many seats, leaving others without a single seat. But I can tell you that TCAS has, in effect, reduced the problem,” Prasert said.

TCAS was not without flaws, he said, although “we will improve TCAS next year”.

He hinted that the CUPT would not allow applicants to medical schools to compete against students in other fields under TCAS.

Students who can sail through to medical schools typically have very high grades. When TCAS gives them up to four choices in its third round, these students will be offered as many as four seats in higher-educational programmes.

While TCAS requires the highly successful applicants to choose just one seat in the end, the process of waiting adversely affects other candidates. “TCAS should have had a reserve list so that the next best performers know they have a chance and can wait,” Manas said.

He said he had heard that many students agreed to make do with their least favourite choice because it was offered to them, rather than trying again in the next round.

“This is in spite of the fact that seats in their favourite programmes may become available after successful candidates give up seats offered to them,” Manas said.

Of more than 80,000 successful candidates in the third round of TCAS, just 58,075 have confirmed they will take the seats.

Manas added that the portfolio round also cost some students a lot of money, because each university had different requirements for portfolio submissions.

Manas said students were also frustrated that criteria or the number of seats in some TCAS rounds had changed and caused confusion.

“Students can’t help feeling that they are being treated like guinea pigs,” he said.

Associate Prof Dr Wicharn Lewkeeratiyutkul from CU Faculty of Science told the seminar that the smartest students would be able to secure a seat in the earlier round of TCAS while students with medium or poor academic performance would get stuck and stressed. Dr Panrapee Suttiwan, dean of CU Faculty of Psychology, said repeated rounds of failure could damage students’ confidence. “But in fact, there are many doors to opportunities in the world. University admission is not everything,” she said.

Assistant Prof Athapol Anunthavorasakul, who teaches at the CU’s Faculty of Education, said that each university should identify their clear goals and make students aware.

“If universities compete for students in the way that is now happening, no matter how good the admission system’s design, problems will remain,” he said.