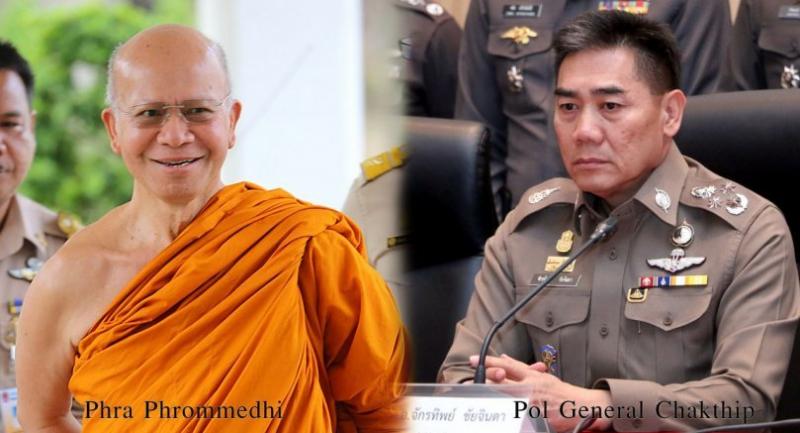 THAI ATTEMPTS to secure custody from Germany of Phra Phrommedhi, the fugitive former assistant abbot of Wat Samphanthawongsaram who is wanted for allegedly laundering millions of embezzled state funds, should be known on Friday, a source at the police head office said.

National police chief Pol General Chakthip Chaijinda flew to France with his team on Sunday night in what is reported to be an effort to seek help from the Interpol head office to secure the extradition of the fugitive monk, now known by his lay name Phra Chamnong Iam-intra.

Chakthip’s previous trip to Frankfurt to take custody of the monk was a failure as Germany turned down the request and questioned “undemocratic” Thailand’s credibility, the source said. If coordination with Interpol were fruitful, Chakthip’s team would travel to Frankfurt to pick up the fugitive and return to Thailand on June 16 as previously scheduled, the source said.

Meanwhile, the ongoing investigation has found more evidence of corruption. Bangkok’s Wat Sa Ket allegedly received Bt62.5 million from the National Office of Buddhism (NOB) on two occasions – Bt30 million on December 21, 2015 for dhamma training for children and youth; and Bt32.5 million on January 7, 2016 to propagate Buddhism – a police source said. Under these projects, the temple said it would allocate money to 13 temple branches but the police probe initially found nine branch temples did not get any money while four temples got only Bt2 million each, the source said. The rest was wired to others’ bank accounts and allegedly spent on wrong purposes, the source said.

Meanwhile, the president of the Network of Lawyers and People for Protection of Buddhism, Vorakorn Pongthanakul, led members to visit the five former senior monks at the Bangkok Remand Prison.

Vorakorn told reporters that the five ex-monks – the former abbot of Wat Sam Phraya, the former secretary of Bangkok chief monk, and three former abbot assistants of Wat Sa Ket – had turned down his group’s offer of legal assistance as the ex-monks already had their own lawyers.

Meanwhile, Department of Special Investigation chief Pol Colonel Paisit Wongmuang said the disciplinary committee probing senior investigator Pisitchai Sawangwattanakorn over his Facebook posts that raids and arrests would be made at four Bangkok temples should conclude their investigation in 30 days. Paisit said that Pisitchai had admitted that he had based the information for the posts about police’s ongoing investigation on news reports from media and his own imagination.