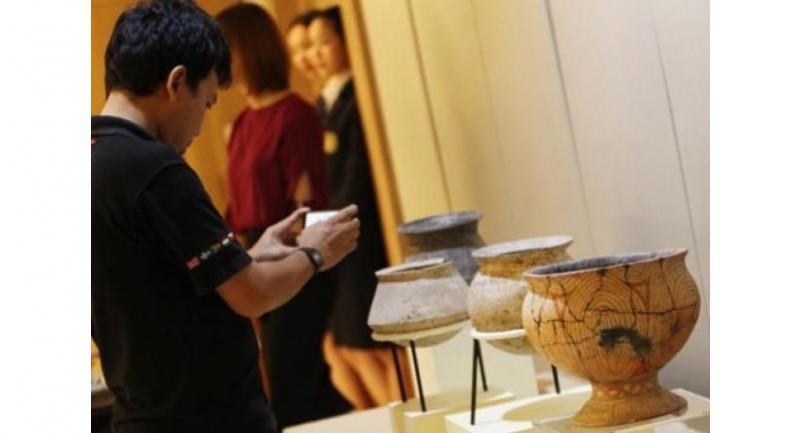 In 2014, the US government returned more than 500 artefacts looted from Ban Chiang, originating from the prehistoric period, which were in possession of the Bowers Museum in Santa Anna, California. Photo/The Nation

Accustions by a scholar in London that her prestigious institution possesses a 13th-century sculpture suspected of being looted from Thailand have re-alerted authorities here to illegal trafficking in Thai artefacts.

The Foreign and Culture ministries have responded quickly by launching an investigation into the case. The move came after Thai media early this week revealed that School of Oriental and African Studies (SOAS) scholar Angela Chiu had accused her institution of accepting the potentially looted one-metre-tall Buddha statue that stands at the entrance to its Brunei Gallery. It was gifted to the SOAS by American alumni Mary and Paul Slawson who reportedly bought it minus documents of its provenance some 30 years ago. On its website, the SOAS describes the statue as “a delightful 13th-century Lopburi Buddha torso of Thai origin”. It has denied any wrongdoing in accepting the sculpture. “We strongly reject any suggestion that SOAS University of London has handled this donation improperly. The allegations made in the blog post by this student are without foundation,” SOAS spokesperson Vesna Siljanovska told The Nation by email.

Thai Ambassador to the UK Pisanu Suvanajata has since contacted SOAS director Baroness Valerie Amos for answers. Thai embassy officials in London also met with John Hollingworth, head of Galleries and Exhibitions at the SOAS. “He informed them that his team had checked with the International Council of Museums and found that the artefact is not on the ICOM [International Council of Museums] Red Lists of lost or vulnerable artworks.”

However, Chiu commented that checking ICOM Red Lists was not sufficient. “ICOM does not say that checking its Red List is a substitute for documented provenance.”

There are no Thai objects on the Red List.

SOAS is preparing information on the statue to hand over to the Thai Embassy in London. The Foreign Ministry will report back to the Culture Ministry’s Fine Arts Department (FAD) with the results.

“If we feel there is a case to be made, we will ask the Thai authorities’ ad hoc committee responsible for retrieving looted art from abroad to follow up,” FAD director Anan Chuchote told The Nation.

Chiu had already consulted a member of the ad hoc committee, archaeologist Tanongsak Hanwong, as part of her own investigation.

“This Thai treasure is very important as the 700-year-old artefact is among the rarest of Lopburi Buddha statues,” said Tanongsak, adding that Chiu’s investigation had considerably cut the time Thai authorities required to gather information.

“If we prove that it’s our treasure, Thai authorities will negotiate with SOAS for its return,” Anan said. Archaeologist Tanongsak has for decades devoted himself to retrieving looted Thai treasures.

“I hope this case will inspire the ad hoc committee to hasten efforts to retrieve many other smuggled Thai artefacts from US museums,” he said.

Set up just over a year ago, the ad hoc committee has located several missing Thai treasures in prestigious institutions overseas.

“After a one-year investigation, the ministry’s urgent task is to bring back five architectural artefacts, including two prominent 11th-century stone lintels from Prasat Nong Hong in Buri Ram and Prasat Khao Lon in Sa Kaew, which are currently in the permanent collections of the Asian Art Museum in San Francisco,” Anan said. Thai authorities are also working with US counterparts to verify whether 69 prehistoric Thai artefacts currently stored in US museums were also looted.

In 2014, the US returned more than 500 prehistoric artefacts from Ban Chiang, from the Bowers Museum in Santa Ana, California.

Among other Thai looted art treasures retrieved are the Narai stone lintel, from the Art Institute of Chicago in 1988, and a 12th-century Lopburi-style Buddha Statue that was stolen from Tung Saliem Temple in Sukhothai in 1977.

Efforts to retrieve more missing Thai heritage are being spurred by the rise of a new hi-tech National Artefacts Storage facility, which will house five millennia of Thai artefacts.

The Bt491.5-million storehouse in Pathum Thani’s Klong Luang district will be finished by the end of this year. Its four storeys will shelter more than 200,000 cultural relics over 30,000 square metres, protected by hi-tech humidity controls, handprint scanners and a fire-fighting system of the type found in the finest museums.

“When the storage facility dubbed ‘Thailand’s Smithsonian’ opens its doors in early 2019 it will be a learning centre for archaeologists and museologists from across Southeast Asia,” explained Anan.

“The new building will be a modern ‘visible storage and study collection’ centre for both academics and the general public to learn more about the region’s history and heritage.”