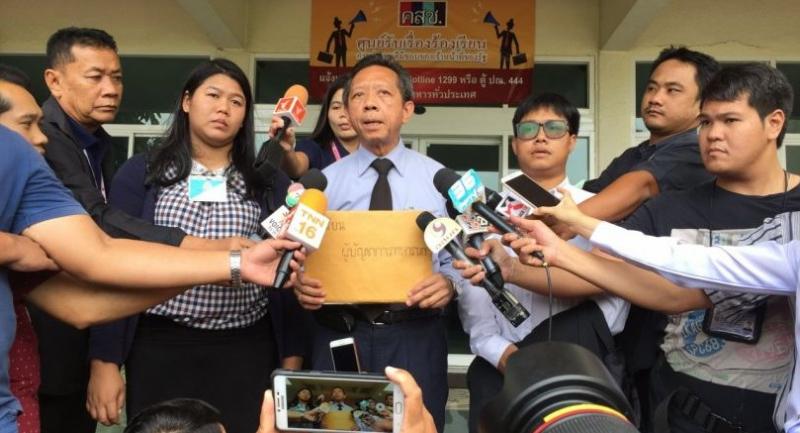 THE LAWYER for the family of young Lahu activist Chaiyaphum Pasae, who was shot dead by soldiers at a military checkpoint in March last year, has petitioned the Army to hand over video footage from the scene.

The surveillance footage – the most important evidence in the case – has not been handed to investigators and is still missing from the case.

“I come to Royal Thai Army Headquarters today on the behalf of Chaiyaphum’s mother to ask for the disclosure of the CCTV footage as per her right to information under the Official Information Act,” Ratsada told the Army chief’s secretary, Maj-General Panatat Kanjanawasit, who promised to pass on the petition to his boss. “We also urge the Army to disclose this prime evidence to the public, as it will not only clear up the ambiguities in this case and help the family, but also benefit the Army and defendants by showing if Chaiyaphum was really trying to fight the soldiers.”

Ratsada said the Army had also promised to instruct the 3rd Army’s Pha Muang Task Force to hand over the footage to Chaiyaphum’s family soon.

Chaiyaphum was shot dead by a soldier at a military checkpoint in Ban Rin Luang of Chiang Mai’s Chiang Dao District on March 17, 2017. The soldier later claimed that Chaiyaphum had tried to throw a grenade. Surveillance cameras were operating at the checkpoint at the time of the killing. Neither the investigating officers nor Chaiyaphum’s family have |seen the footage from the scene, as the hard disk initially handed over by the Army was found to be empty.

Lacking this crucial evidence, the Chiang Mai Provincial Court on June 6 ruled that Chaiyaphum was shot dead by the soldier, but did not touch on the reason for the killing.

Ratsada said Chaiyaphum’s family was still suffering and felt justice had not been served due to the vague nature of the investigation of their son’s killing.

They would continue to pursue justice for their son, the lawyer said.