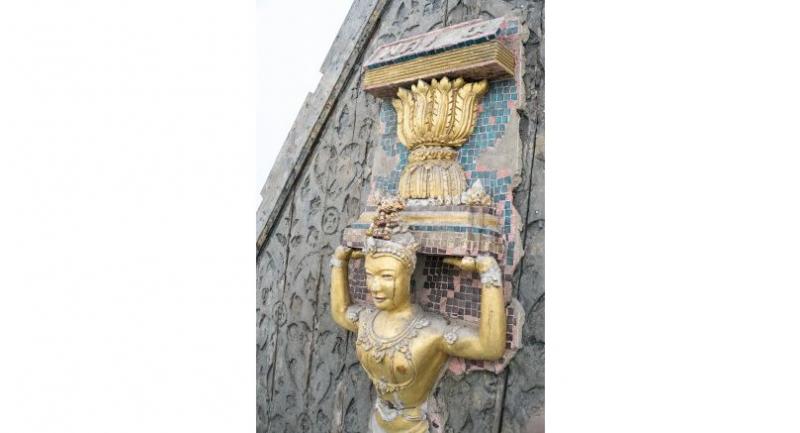 The stunning old wooden pediment featuring a deity holding an image of the symbolic constitution from Wat Trimitr is among the highlight at "Revolutionary Things" exhibition at Cartel Artspace. Photo courtesy of Cartel Artspace

Eight-six years ago this day, the Siamese Revolution of 1932 led by the People’s Party spurred the Kingdom’s historic transition from an absolute monarchy to a constitutional monarchy when King Rama VII agreed to a codified Constitution to end the bloodless coup.

To commemorate the historic event in modern Thai history, young architecture scholar Chatri Prakitnontakan and curator Kittima Chareeprasit symbolised  the political concepts and ideology of the People’s Party through a new art exhibition “Revolutionary Things”, which opens today at Cartel Artspace in Bangkok.

“Within merely 15 years [1932-1947], the People’s Party devised and introduced many significant policies that uprooted the longstanding dogmas and norms with the aspiration to develop and modernise the country in different aspects, which are also manifested in art, design and architecture,” architect Chatri told The Sunday Nation.

The People’s Party promoted “constitutionalism” and “the Six Principles”, he said, citing national independence in all respects including the political, the judicial and economic; national security; economic well-being; guaranteeing equality; liberty and freedom; and education to the people.

Chatri has been doing this research for a decade by studying objects found across Thailand in order to understand their efforts to move the country into the modern era. Regarded as cultural evidence from that era, these surviving objects have allowed them to explore the successes and failures of the People’s Party.

Running through July 29, the show features more than 50 cultural objects ranging from daily utensils like jars, water bowls, and buttons, to state-led construction of things like flagpole base, monuments, and architecture, to even religious items, for example, Buddhist pulpit, pediment, and talipot fan stand. Among the highlights is the stunning old wooden pediment featuring a deity holding an image of the symbolic constitution over her head from the sermon hall at Talingchan Temple in Bangkok.

“Most of them share a “similar” feature – the image of democracy, symbolised by the constitution on the foot-tray – similar to the one in the Democracy Monument conceived by Professor Silpa Bhirasri and their popular mottos created by or under the influence of the People’s Party,” explained Chatri, who now teaches at Silpakorn University.

Curator Kittima added that the concept of “democracy” is also a symbol of progress and modernity, which plays a part in the trend towards the creation of different objects to reflect such symbols and values.

Among them is the old Supreme Court complex, which has six pillars symbolising the Six Principles. Another important piece is the replica of the old crematorium at Wat Trimitr, which was later demolished. The building was first constructed for commoners reflecting the People’s Party concerns for the life of common folk.

Kittima added that the art-deco style was influenced by the art and designs in vogue in that era. The idea of fascism – a form of radical authoritarian nationalism – was also introduced in Thai art.

“Besides the state-ordered architecture, the trend also appears in everyday objects that shows many people were celebrating democracy in the modern era of Thailand,” he explained.

“The array of cultural works reflects the images of commoners, equality, and modernity. This movement ultimately gave birth to a new form of Thai art that can be called the art of the People’s Party,” said Kittima, who teaches at Chiang Mai’s Fine Arts Faculty and is a founder of “Waiting Your Curator Lab”, a multidisciplinary practice.

A coup staged in 1947 led to the end of the People’s Party. The modern ideas on Thai art slid to celebrate the three main pillars – nationalism, religion and monarchy.

On this occasion, Waiting You Curator Lab Publishing has collaborated with Rabbithood Studio to design “Revolutionary Things Game Cards” that aim to help audiences to understand more about the works of the People’ Party as well as their ideology. By scanning the QR code on the card by mobile phone, players can read the history of 52 products that are on display.