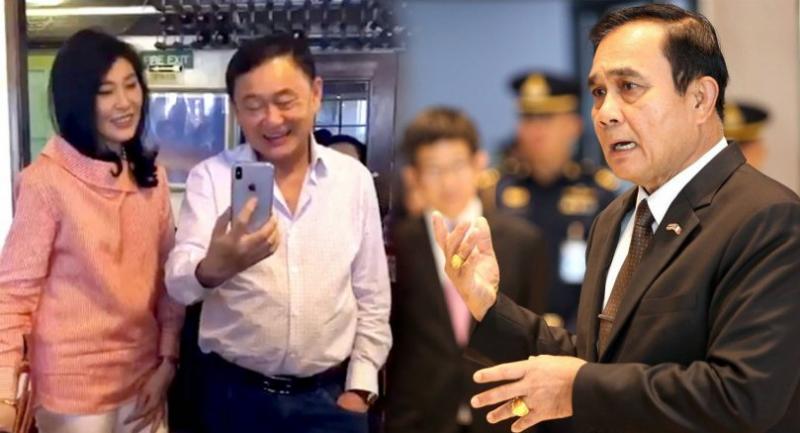 Without naming him in person, Prime Minister Prayut Chan-o-cha on Tuesday effectively told fugitive ex-PM Thaksin Shinawatra to return home to fight court cases against him if he believed in his innocence.

General Prayut said that people living in self-exile overseas and escaping from Thai law were just “second-class citizens” in their host countries.

He also criticised the media for presenting news about “someone who committed wrongdoing and fled the country to live overseas”.

“Why did you care about him? You would do better caring about someone who is working for the country now,” Prayut said, without naming anyone.

“Please don’t give credit to people who attack their own country. They were born Thai, but now live in another country as second-class citizens,” he said.

Prayut, who also heads the ruling junta, the National Council for Peace and Order, added that he was not referring to anyone in particular in making these remarks.

He was speaking at Don Mueang military airport following his return from a trip to the United Kingdom and France, during which he met government leaders of the two European countries.

Thaksin, who has been in self-exile abroad since 2008, earlier criticised Prayut and his government. While Army chief, Prayut in 2014 led a coup to overthrow an elected government led by Thaksin’s younger sister, Yingluck Shinawatra, who is now in self-exile with Thaksin in London.

Prayut on Tuesday said he had received an “honourable welcome” from both the UK and France during his recent trip.

The PM also said he had seen both support and protest from separate groups of Thai expatriates in those countries, adding that he was not however angry at the protesters.

“They may not understand me today, but in the future they may have a good understanding,” he said.

The premier also defended his post-coup government against criticism over its handling of the country’s economy.

He said gross domestic product had expanded continuously to a growth rate of 4.8 per cent in the first quarter of this year, compared with just 0.9 per cent before his administration came to power.

He also disputed a claim by critics that only wealthy people benefited from his government’s economic policies.

“All groups of people have benefited,” he insisted.

Prayut added that his government’s Thai Niyom development project was aimed at poorer people. “This government is serving everyone at all economic levels. Don’t accuse us of working for the rich only,” he said.