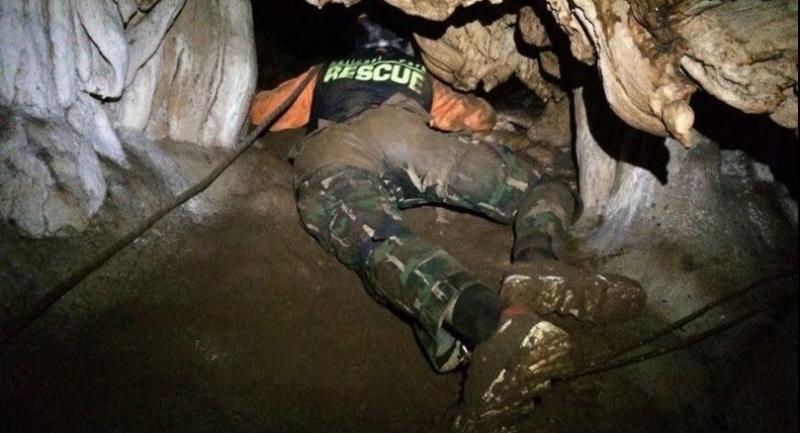 THE SEARCH FOR access into the Tham Luang Cave through shafts or cracks from the mountain above has been intensifying as rescue efforts via the cave’s only known entrance have met with tremendous obstacles.

Chiang Rai Governor Narongsak Osottanakorn said yesterday 24 teams of officials and volunteers are now scouring the area in the hope of finding a shaft that will lead to the 12 teenage footballers and their coach, who were last seen on Saturday. Two have already been checked and ruled out but there is still a possibility that the third will lead to the victims.

“We hope this shaft will lead down to the cave and further to its Pattaya Beach, where the victims may have been stranded,” Suwit Kosuwan, who heads the Environment Geology Bureau’s Active Fault Research Unit, said yesterday. Parts of the cave are flooded to a depth of seven metres, hampering the search through thin air and mud.

“Available data suggests that it will be easier for officials to walk around the cave if they start from the latter part of the cave,” Suwit said.

Asked about the possibility of drilling down from above the cave, Suwit said the ceiling of the cave in that area was believed to be about 100 metres thick.

“Given modern technology, drilling is possible. But it will take too much time to reach the victims,” he said. Asst Prof Dr Suttisak Soralump, an engineering lecturer at the Kasetsart University, said that it was possible to drill a small hole, about 100 metres deep, in half a day. The hole would be about six or eight inches wide.

“If that hole connects to the cave, sunlight will shine through and the stranded victims will be able to know help is coming. We will also be able to send food down and plan further steps,” Suttisak said.

He said that any drilling must be planned carefully to prevent any collapse inside the cave.

Narongsak said finding a passable shaft and reducing floodwater inside the cave appeared now to be the major means to help the victims.

Located in Chiang Rai province, Tham Luang Cave is usually off-limits to visitors during the rainy |season. However, locals say that flooding usually hits the area |from next month onward.

When the young footballers and their coach went into the cave on Saturday, the area was still dry, but a flash flood hit soon after. While all-out efforts to reach the victims has continued since Saturday, rain has also continued to push more water into the cave.

Pol Lt General Kraiboon Suadsong, who is on a deputy prime minister’s team at the cave site, said late yesterday afternoon that five more big pumps were installed inside the cave for water drainage.

“They should help a lot. Water will be driven out via three-kilometre-long tubes,” he said.