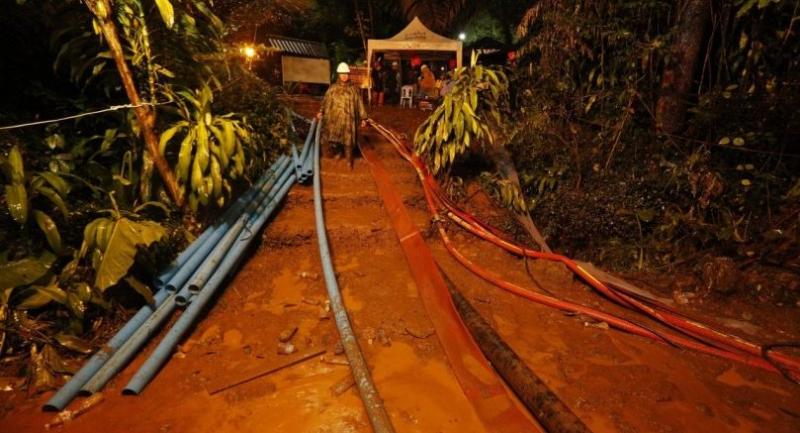 OPERATIONS to drain floodwater out of Tham Luang Cave have failed due to a lack of information about the hydrology of the area and continuous heavy rainfall which forced Navy SEALs to suspend their rescue mission.

Yesterday markes the fifth day of operations to save 12 young footballers and their coach, who are thought to be stranded inside the flooded cave in Chiang Rai’s Mae Sai District, but the SEALs remained unable to access the inner chamber of the cave to locate the team as |plans to drain floodwater did not work. Thai rescue personnel prepare drilling equipment under heavy downpour at Khun Nam Nang Non Forest Park in Chiang Rai province on June 28, 2018 during rescue operation for a missing children's football team and their coach in Tham Luang cave. A team of US military personnel and British divers joined rescue efforts at a flooded cave in northern Thailand where 12 children and their football coach have been trapped for five days as heavy overnight rains hampered the search. // AFP PHOTO

The RID team drained the pond yesterday morning, but the water level in the cave remained high and continued to rise, said Krit.

“We do not have hydrology information for the area, because we have not previously surveyed it,” he admitted.

“We deployed the mission to drain water from Nong Nam Pu based on local knowledge that water from the cave flowed into it.” A Thai official (C) takes a photo in the area where the officials used as a gathering point inside the cave, but now is flooded, during the rescue operation for missing football players and their coach at the Tham Luang cave in Tham Luang Khun Nam Nang Noon Forest Park in Chiang Rai province, Thailand, 28 June 2018. At least 12 members of a youth soccer team are believed to be missing after being trapped in a flooded cave that they were visiting on 23 June. // EPA-EFE PHOTO

According to latest reports, the water level inside Tham Luang Cave yesterday rose to its highest point since the rescue mission began. Nearly the entire previously passable section of the cave was submerged by inflows from heavy rains throughout Wednesday night through yesterday morning.

The water kept rising yesterday morning despite authorities’ best efforts, as rainwater from the mountain above continued to seep into the limestone mountain’s many cracks leading into the cave system.

A member of the Navy SEALs, who asked not to be named, told The Nation that the situation in the cave had taken a rapid turn for the worse on Wednesday night, as the water level increased very fast, submerging nearly the entire accessible section and forcing the SEALs to withdraw from the cave.

The flash flood in the cave overwhelmed the drainage capacity of 20 water pumps that had been installed on Wednesday afternoon.

“The water has flooded the entire section of the cave. With floodwater flowing out of the cave entrance, we have no choice but to suspend our operations until the situation is improved,” said the source.

The Navy SEALs Facebook page, “Thai Navy Seal”, posted photos of the floodwater reaching as far as the cave entrance. According to the page, some Navy SEALs were standing by at the cave entrance while the remainder had been dispatched to support the mission in the mountain forest above the cave in search of alternative entrances to the cave system.

As well as lifting water levels in the cave, the rain is turning the rescue mission’s operation centre into a muddy mess, making the task of every official even more difficult.