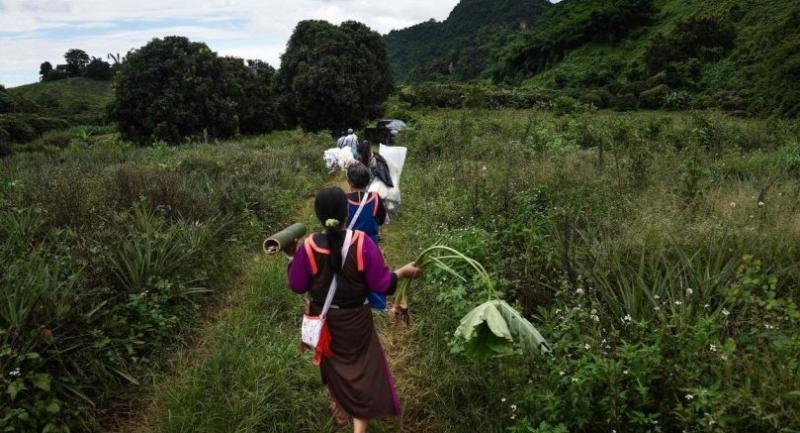 Ethnic Lisu tribe people arrive at Khun Nam Nang Non Forest Park in the district of Mae Sai, Chiang Rai province for a ritual to appease the spirits of Tham Luang cave and the safety of the children on July 2, 2018. // AFP PHOTO

A hermit in tiger-print robes, animal sacrifice by hill-tribes and rounds of Buddhist prayer: the physical efforts to reach a teenage football team trapped in a flooded Thai cave are being matched by a surge of Thai spirituality.

The saga, which on Monday entered a ninth day, has stirred a deep response in a nation where Buddhist ritual and animist practice is cross-stitched into daily life. A hermit stand beside the road leading to Tham Luang cave in Khun Nam Nang Non Forest Park in the district of Mae Sai, Chiang Rai province for a ritual on July 2, 2018. // AFP PHOTO

On Monday as divers edged through thick mud and water closer to a raised area where they hope to find the stricken team alive, several colourfully-dressed ethnic minority Lisu tribespeople arrived near the entrance to the cave.

They chanted and sacrificed chickens and pigs in an offering to the river and forest spirits, imploring the safe return of the 12 boys, aged 11 to 16, and their 25-year-old coach.

Later a hermit -- known in Thai as "reusee" -- was seen wrapped in a tiger print cloth standing motionless and silent on a nearby road, as practitioners of the nation's complex and diverse belief systems converge on the cave.

Offerings have been made at homes, schools and temples across the country, while the Supreme Patriarch -- the head of Buddhist clergy -- has urged Thailand to unite in prayer for the safe return of the team. Ethnic Lisu tribe people arrive at Khun Nam Nang Non Forest Park in the district of Mae Sai, Chiang Rai province for a ritual to appease the spirits of Tham Luang cave and the safety of the children on July 2, 2018. // AFP PHOTO

The fate of the young boys has drawn gospel-singing Christians to the teeming rescue site, while Muslims across the Buddhist-majority country were asked to dedicate Friday prayers to the missing footballers.

The "Tham Laung Khun Nam Nang Non" cave that holds the team captive, comes with its own mythology. In a region where mountains and caves all possess spirits in need of appeasing, it is better known as the "sleeping woman" mountain.

It is a name derived from the topography of the mountainside, which resembles the profile of a pregnant woman lying down.

Local lore runs that the cave is governed by the spirit of a pregnant princess, who killed herself with a hair pin after her commoner partner was executed, her blood forming the origins of the cave's waters.

A shrine at the cave entrance now overflows with incense, candles and marigolds.

Belief has billowed out onto social media in Thailand, where the spiritual blends seamlessly with modernity -- with shopping malls and new condos all decorated with elaborate spirit houses.

"Please, forest spirits, please protect the children," one user wrote on Facebook, which has become a go-to source of information and inspiration during the desperate search.

Memes showing the team being led out of the darkness, arms aloft, have pinballed around social media, with a twitter hashtag translated as "the strangers we want to see most" trending.

Musicians have also taken up the cause.

"We do not know who you are, what you look like, but where are you... are you cold or hungry?" famous Thai singer Kong Huayrai sings in a ballad penned for the team after they were trapped.

"Can the wind reach you to tell you there are people here waiting for you?"