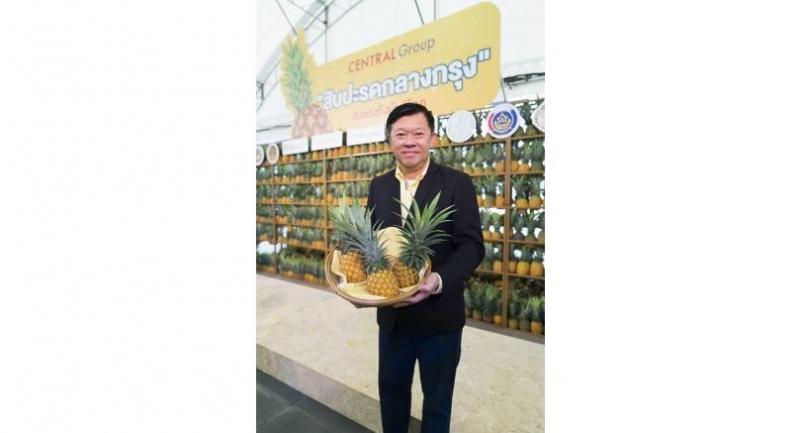 Central Group has joined Pracharat Raksamakkai of Ratchaburi to host a two-week “Pineapples in the City” series of events, helping local growers from Ban Kha district to sell their produce during a period of excess supply and low prices.

Space has been provided to sell more than 100 tonnes of pineapple at four stores in Bangkok, with combined sales at the events expected to exceed Bt1 million.

Under the project, growers can sell their high-quality produce to consumers and generate revenue for themselves directly.

Pichai Chirathivat, executive director of Central Group, said on Tuesday: “We heard the news that from last May to June, pineapple growers faced a severe crisis due to pineapple fruiting in large numbers, while the number of growers has also increased. This has caused pineapple prices to soften from Bt14-Bt15 to only Bt7-Bt8.

“The main problem is that growers do not have adequate distribution channels to sell their produce. So, Central Group joined with Pracharat Raksamakkai of Ratchaburi to assist this group of growers by hosting ‘Pineapples in the City’. This will help sell pineapples from the Ban Kha group in Ratchaburi, who number 3,076 growers and produce 273,000 tonnes per year.

“We have provided space for growers to sell their pineapple at a price of Bt15 per kilo at four stores: from July 3-9 at Square A, Central World; July 3-10 at Promotion Hall, Central Plaza Ramindra; and July 3-15 in front of PowerBuy Floor G, Central Plaza Pinklao and at the Balcony zone, Floor 1, Central Plaza Westgate.”

Pineapples from Ban Kha are of the Batavia variety, a famous cultivar of Ratchaburi province with a registered standard Geographic Indicator.

Production and management systems are laid out by growers using the same methods in order to save costs and increase production efficiency.

The specialty of this variety is that the eyes are rather shallow, with a fragrant aroma and a refreshing sweet taste, as well as delicate, soft flesh with no acid effect on the tongue.

“We hope that this project can help sell over 100 tonnes of pineapple from Ban Kha in Ratchaburi, with a total value of over Bt1 million. We hope to assist Thai growers in creating jobs, creating careers, helping building community and improving the quality of life, which aligned to Central Group’s core CSV project ‘Central Tham’.

“Our assistance to growers is continuous through business units in our group such as Tops, Central Food Hall and Thai Wasadu, which provides all branches with parking space to be the channel to present quality products to our customers. This has created emotional connections of growers with consumers,” Pichai explained.