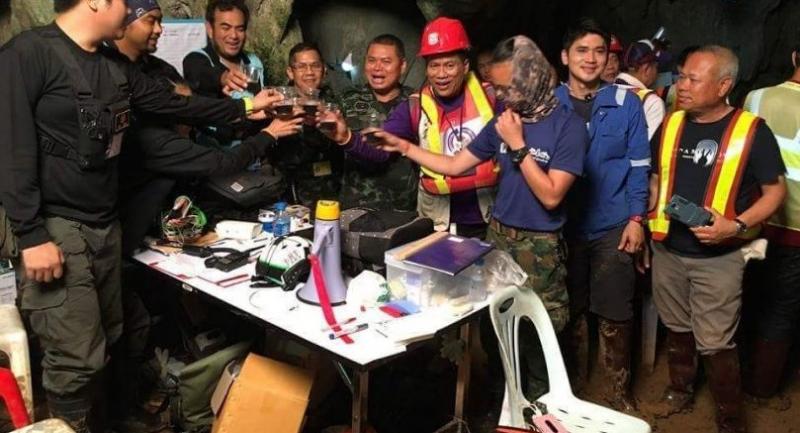 THOUSANDS OF Thais were behind the successful effort to locate 13 members of a Chiang Rai football team who are trapped inside the flooded Tham Luang cave.

Thais have worked tirelessly since the first reports of flash floods hitting the cave and leaving the 12 young footballers and their coach stranded on June 23. On Monday night, two British divers found all members of the Mu Pa Academy football team who were stranded midway along the 10-kilometre cave.

The discovery of the team is a remarkable outcome that is a credit to everyone, local and foreign, who contributed to the success of the operation. Among them are key contributors such as Chiang Rai Governor Narongsak Osotthanakorn, Royal Thai Navy’s SEALs, experienced diver volunteers, rescue workers, soldiers, policemen, state officials, geologists, engineers and academics. All of them persevered throughout the search.

Narongsak proved his strong leadership and management skills. At critical times, he made sure all efforts at the cave were coordinated. He stood firm on drawing up careful plans to ensure no one risked their life trying to rescue the trapped team.

He also made sure that journalists worked within proper bounds and stayed clear of zones that could hurt rescue efforts.

The SEALs also played a vital role in the mission.

They were at the frontline, working through muddy, cold water inside the dark cave.

At one point, rising floodwaters forced them to retreat closer to the mouth of the cave, but their determination did not waver. Alongside the SEALs, a group of Thai divers who have completed specialised diving training in Italy, worked exhaustively. The group is associated with famous singer Narinthorn na Bangchang, who also brought useful devices to assist the operation.

At the same time, Royal Irrigation Department officials, along with a support team, officials from the Groundwater Resources Department and the Thai Water Well Association worked constantly to drain floodwater from the cave.

They drained groundwater from areas around the cave to allow floodwater to seep out faster and erected check dams to ensure more rainwater does not add to the water level inside the cave. On the mountain above the cave, many survey teams inspected every shaft to find an alternative route into the cave. Academics from various institutes, such as the Kasetsart University, also engaged in data analyses for plans to reach the stranded victims from above the cave.

Thanet Veerasiri, president of the Engineering Institute of Thailand, also toiled at a shaft.

Suwit Kosuwan, who heads the Environment Geology Bureau’s Active Fault Research Unit, worked from his Bangkok office to feed useful data to rescue planners. Many other geologists from various agencies also contributed to the rescue efforts.

“We know we cannot go into the cave and save the victims ourselves. But we do our best to offer support,” he said.

Rescue workers from foundations such as Siamruamjai Salvation and Poh Teck Tung have also given essential assistance. They have carried out support work to help make the operations run smooth.