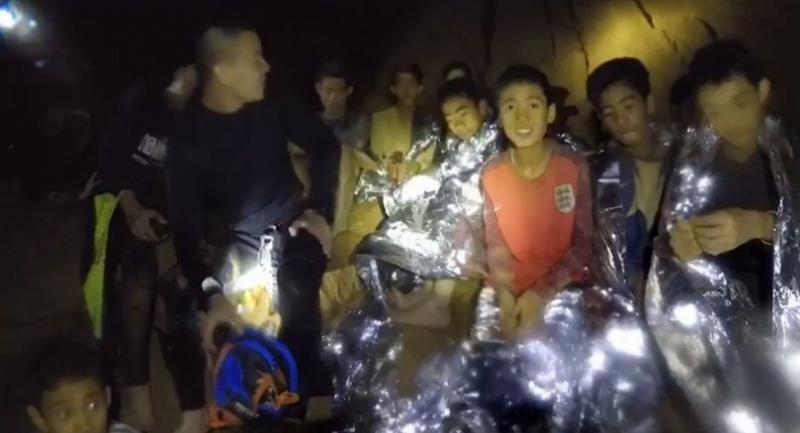 Rescuers do not want to delay their exit due to upcoming rains and the possibility of more flooding in cave.

ALL 13 survivors are now familiarising themselves with diving gear as rescue planners concluded yesterday that they will have to dive through floodwaters to get out of the Tham Luang cave, where they have been stranded since June 23.

“The fittest of the survivors will be the first to come out,” Narongsak Osotanakorn, the head of the rescue operations, said yesterday. “Others will follow.”

The former Chiang Rai governor spoke as the floodwater level inside the cave subsided thanks to the powerful pumps, well-connected tubes, and diversion of the natural water flow around the Tham Luang cave system.

The easing of the flood situation has raised the prospects of helping the 13 footballers come out of the cave where they have spent 11 days.

“The floodwater level has been dropping by one centimetre per hour. If we can maintain this momentum, it should be safe enough to bring the kids out soon,” Narongsak said. On Tuesday, the US Cave Rescue Commission’s national coordinator Anmar Mirza said that while diving was the quickest option to bring the survivors out, it was also the “most dangerous” option.

But the option of letting the survivors stay inside the cave until the floodwaters completely receded was yesterday ruled out amid the significant risk of impending heavy downpours that could again leave the cave flooded. The 10-kilometre-long cave in Chiang Rai province is normally flooded between July and November every year. On Monday night, experienced cave divers from Britain found the missing football team at a spot about 5km from the cave’s entrance.

The 13 survivors will stay put at their current location while detailed preparations are being made for their safe evacuation. They have been joined by Royal Thai Navy SEALs and are also supplied with soft food, water, light, medicine, thermal blankets and diving gear.

The survivors were yesterday taught to wear full-face masks and practice breathing.

Medics, including Army doctor Colonel Pak Loharachun, have completed health checks for all team members and found them relatively healthy. A video clip released yesterday showed the footballers had minor wounds and were apparently eager to leave the cave. One footballer asked, “Can we go out today?” Pak told the boys to be patient, explaining that despite his diving skills it took him six hours to move from the third chamber of the cave to the current location of the survivors.

The third chamber of the cave, which is about two kilometres from the entrance, is now operating as the forward command of the rescue operations. Lighting and communication devices have been installed there and also supplied with oxygen tanks, medicine and all other necessary supplies.

From the third chamber to the flooded T-junction is a distance of about 800 metres. From that intersection, there is a narrow and completely submerged passage that requires rescue teams to dive to get through. The floodwater level there was nearly five metres as of press time.

After getting out of this narrow passage, rescue teams have to climb and hike a stretch of 400 metres. This zone is dry. Then, they have to dive for about another 130 metres to reach the so-called Pattaya Beach. Then the team must walk further over the beach before making another 400-metre-long dive to reach the slope where the survivors have gathered.

All these survivors will have to be taught to swim and dive before being escorted out.

Even with diving experts by their side, the team will have to dive and swim on their own at some points in the journey out of the cave.

The two Britons who first located the missing victims – Richard Stanton and John Volanthen – have remained with the rescue team to help with the safe evacuation. The other British expert, Robert Harper, who was in his 70s, had to leave Chiang Rai province yesterday, though, to undergo a medical check-up in his homeland.

A rescue team from the United States Indo-Pacific Command has also vowed to support the operations at the Tham Luang cave until all 13 survivors are safely brought out.