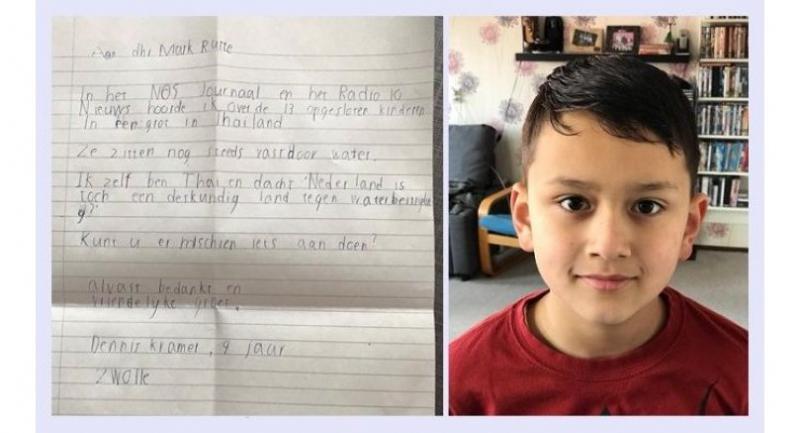 Dennis Kramer and his letter (photos from his mother's Facebook)

A Thai-Dutch boy has written a letter to the prime minister of the Netherlands asking if the country could help evacuate the young footballers trapped in a Chiang Rai cave since June 23.

In his letter to Dutch PM Mark Rutte, nine-year-old Denise Kramer asked “Could you do something about it?”

The young footballers and their coach were located in the heavily flooded Tham Luang cave10 days after they went missing. However multinational rescue teams have not been able to evacuate them from the cave as their condition is weak after starving for days and the exit path is heavily flooded water levels reaching the roof in parts of the cave.

According to Dennis, since Netherlands has expertise in water management the country must be able to do something.

His mother, Nantinee Ruangsakorn, posted the letter on her Facebook, saying the letter was short and precise as “I guess the PM may not have the time to read a long letter”.

The request was made as an open-ended question so that the reader will not feel pressured, she said.

She also wrote that she and Dennis, who live in Zwolle, watched news reports about the 13 footballers of Mu Pa Academy football club trapped in the Tham Luang cave and how many foreign countries had extended help.

She asked her husband why Netherlands was not doing anything, so he said they were not experts in caves because “we have no caves”.

“The present problem is not about caves but about the large volume of water which hampers the evacuation of the boys. I think Netherlands is the best country in the world in managing water,” she told her husband and he agreed.

That’s when Dennis said he hoped the water level will go down as soon as possible so that the boys could go out and play.

The mother urged her son to help the stranded boys by writing a letter to the Dutch premier.

That’s how Dennis’s first letter was written, the mother said, adding what the premier will decide is now up to him.

It is not yet clear whether Mark Rutte has already read the letter. “Thanks in advance and a friendly greeting”, Dennis concluded.