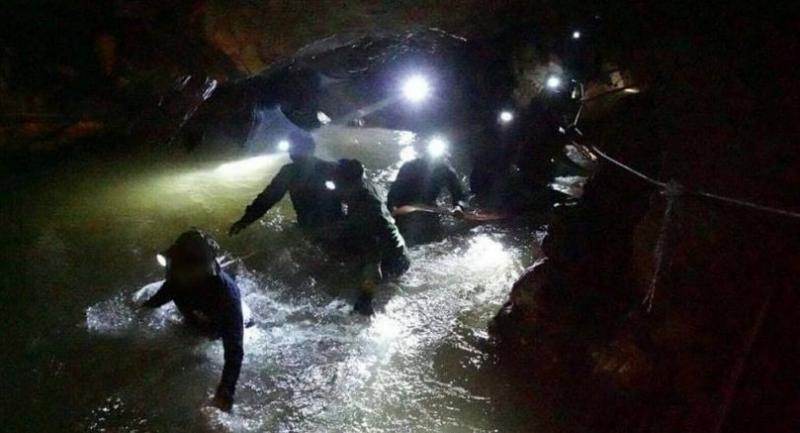 SpaceX engineers flying to Thailand to explore possibilities; the death of an exnavy seal dampens enthusiasm to let the stranded 13 dive out

Alternative ways to evacuate the 12 stranded boys and their football coach from the Tham Luang cave have emerged, including one suggested by US entrepreneur and tech expert Elon Musk.

In a series of tweets, Musk said engineers from his SpaceX and Boring companies are heading to Thailand to see if they can help Thai authorities, especially in view of the complexities involved in this unique rescue situation.

Earlier, Thai authorities had planned to have all the 13 dive out of the cave, but the death of a former Thai Navy SEAL member early yesterday appears to have made planners reconsider their options.

Given the unprecedented challenge in this rescue effort, Musk said in one of his tweets that it maybe worth trying to build a one-metre-wide nylon tube network with a shorter set of tubes in the most difficult sections and then inflate the tubes with air to create something like a bouncy castle to transport the boys out of the cave.

The underwater air tunnel can be installed against the cave roof and can auto-conform to odd shapes like a 70cm hole, Musk wrote in his tweet in response to @JamesWorldSpace.

Bloomberg also reported that Musk’s representatives are discussing with Thai authorities on how they could help.

Musk’s SpaceX company has developed world-class technologies for space activities, while other companies founded by the US billionaire have built heavy-duty batteries for Tesla electric cars and other uses, as well as cutting-edge earth-drilling and boring machinery.

In addition, one of his companies reportedly has the technology for precision tracking to locate the area where the boys have been stranded for over a fortnight.

Chaiyaporn Siripornpaiboon, a cave expert at the Department of Mineral Resources, told The Nation that the cave’s floodwater level has become the most crucial factor in determining which option would be the most appropriate to rescue the stranded footballers.

The latest data shows that the most challenging section for the boys to dive out is about 200 metres long, next to the so-called Pattaya Beach where the floodwater is estimated to be 5-10 metres deep.

His comment came after a former Navy SEAL became the first fatality and revealed the dangers of trying to have the stranded boys dive out.

Chaiyaporn said he would prefer to see the floodwater subside to a much lower level to enable the boys to get out safely, but that chance was relatively low as the rainy season has only started.

Another option is to continue exploring for a natural cave shaft through which the boys could be airlifted so that they could avoid diving. So far, explorers have not been successful with this option.

Thanasarn Narue-sataporn, a medical doctor with experience in rescuing people hit by natural disasters, including the last Nepal earthquake, said the cave’s floodwater level is most crucial so authorities have to closely watch the situation around the clock and make their rescue decision in a timely manner.

He said the Tham Luang challenge is unique – unlike any other rescue effort around the world – especially in terms of the number of young people trapped inside a complicated cave network.

In similar cases in Germany or France, only a small number of adult caving experts or trekkers were trapped, but in the Thai case they are boys aged between 11 to 16 and their 25-year-old coach.

While a huge amount of water has been pumped out over the past several days, the cave’s floodwater level remains high due to the area’s mountainous nature.

Authorities are worried about a worst-case scenario where heavy downpour for an extended period in the area could lead to complete flooding inside the cave, including the area currently occupied by the boys and more than 10 Navy SEAL members.

Dr Suttisak Soralump of Kasetsart University said earlier that the Tham Luang challenge is also much more difficult than the 2010 Chilean mine collapse in terms of the attempt to drill the cave to rescue those trapped inside.

In the Chilean case, 33 miners were trapped underground for 69 days but all survived. Suttisak said the Tham Luang cave being totally natural, there is not enough geological data for engineers to work out a solution.

In the Chilean mine case, the site was fully explored prior to the collapse with a lot of data available for rescuers to design their options to get the miners out safely.