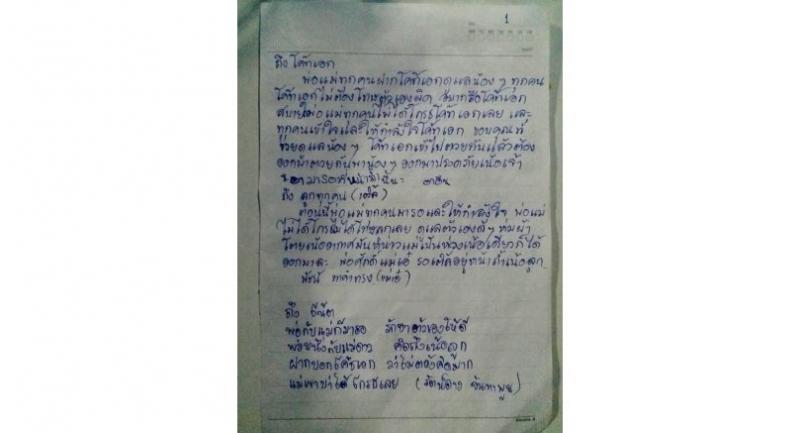 The parents of 12 young footballers trapped inside the Tham Luang cave in Chiang Rai told the assistant football coach who was trapped with the boys not to blame himself.

In their reply to the handwritten letter of Ekkapol Chanthawong, or Coach Ake, they said they appreciated him for taking care of their kids.

In his letter sent via divers, the coach had issued an apology to the parents.

A father, whose son’s nick name is Note, told his son to tell the coach not to feel sad. “Tell Coach Ake not to worry. Your Mum is not angry at him,” the father wrote in a letter sent back to his son in the cave via divers.

The mother of “Titan” said in her letter: “Brother Ake, you must be strong. We love and have concern for you. We are waiting for you in front of the cave. Bring the kids out.”

The parent of Adul told the coach that all the parents were thankful to him for guiding the kids in how to survive.

In their reply to the children sent back via divers, the parents expressed their love for the children and said they were waiting for them in front of the cave.

Titan’s father also wrote in the same piece of paper as: “Dad misses you much. Love you much. Kiss”.