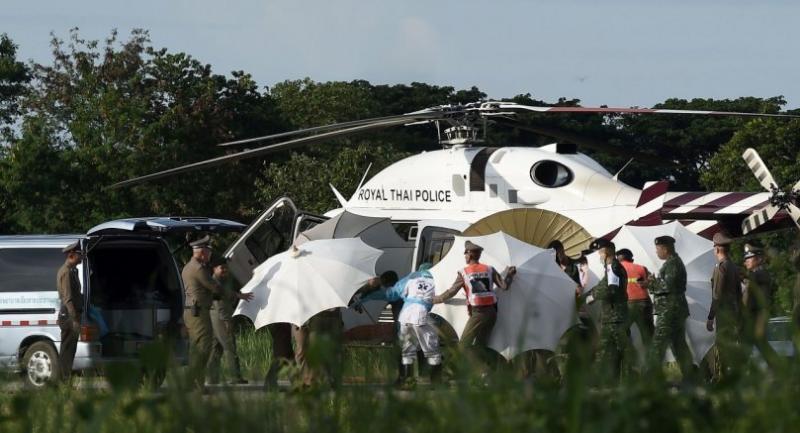 A helicopter prepares to carry one of the evacuated boys at a military airport in Chiang Rai, as rescue operations continue for those still trapped inside a cave located in the Khun Nam Nang Non Forest Park. // AFP PHOTO

AS THE WORLD watches with awe, the dramatic rescue of the 12 boys and their football coach from Tham Luang cave, is unfolding successfully by the hour.

As of yesterday, at least eight of the 13 have been evacuated from the flooded Tham Luang cave in Chiang Rai province and they are now being observed at Chiangrai Prachanukroh Hospital.

The decision to evacuate the stranded 13 was made on Sunday morning and by evening four of the boys had been rescued, taking advantage of a window of opportunity. The mission plunged into the task again yesterday and managed to pull another four out by evening. Rescuers are planning to save all the remaining footballers from the Chiang Rai cave before the monsoon rains unleash their full wrath. Thai soldiers and police officers evacuate a boy from a helicopter to a hospital after he was rescued from the Tham Luang cave, at an air force airport in Chiang Rai province, Thailand, 09 July 2018. // EPA-EFE PHOTO

The drama began 17 days ago as the assistant football coach of a local football team, Mu Pa Academy Mae Sai, and 12 team members visited the mountainous region on June 23. The 13 got stranded deep in the Tham Luang cave following sudden flash floods. The children are aged between 11 and 16 years old and their coach is 25. The muddy floodwaters, the pitch darkness and thin air inside the cave hampered initial rescue efforts. The desperate rescue operation expanded rapidly as numerous rescue workers, the Royal Thai Navy’s SEALs, academics, many organisations in Thailand, and foreign experts, joined the rescue operation.

Since June 30, the floodwater level inside the cave has begun subsiding significantly thanks to the deployment of powerful pumps, diversion of water, and the gesture of farmers in the vicinity to let their fields be flooded in order to drain water from the cave. On July 2, foreign divers found all 13 Mu Pa members alive at a dry spot about 5 kilometres from the cave’s entrance.

Serious preparations for their removal began, including a crash course in diving for the stranded survivors, with evacuations finally kicking off on Sunday.

Foreign diving specialists and Thai SEALs have already successfully helped at least eight footballers brave through perilous narrow passages and tunnels in the cave, with two divers escorting each of the evacuees.

Some flooded passages within the cave are reportedly less than 40 centimetres wide, making it impossible to pass through with an oxygen tank on the back. Buoyed by Sunday’s success, the same diving evacuation team launched the second phase of the operations at about 11am yesterday.

Former Chiang Rai governor Narongsak Osottanakorn, who heads the rescue-operations command, said the divers were sufficiently rested and oxygen tanks had been replaced along their route by the support team. Narongsak Osattanakorn who heads the rescue operation at the Tham Luang cave in Chiang Rai province. They were seeking updates about the evacuation of the stranded footballers.

Narongsak said yesterday afternoon that the prospects for their mission were looking good. “The conditions [yesterday] are as great as on Sunday, with regard to the floodwater level, the amount of air, and the strength of the Mu Pa team members,” he said.

Although it has been raining in Chiang Rai province over the past few days, the floodwater level is still manageable.

The Disaster Prevention and Mitigation Department’s deputy director-general Kobchai Boonyaorana said that the floodwater level inside the cave was even lower.

“There is some rain. But water drainage at the cave has gone as well as planned,” he said. At present authorities have not revealed the identities of the evacuees out of concern for the feelings of parents whose boys are yet to come out. Narongsak only confirmed that the first four evacuees from the cave were in good physical condition. An ambulance exits from the Tham Luang cave area as rescue operations continue for those still trapped inside the cave in Khun Nam Nang Non Forest Park in the Mae Sai district of Chiang Rai province yesterday.

While the rescue efforts have achieved incredible success, they have been beset by one fatality. Former SEAL, Petty Officer First Class Samarn Kunun, 38, died during the rescue operation last week.