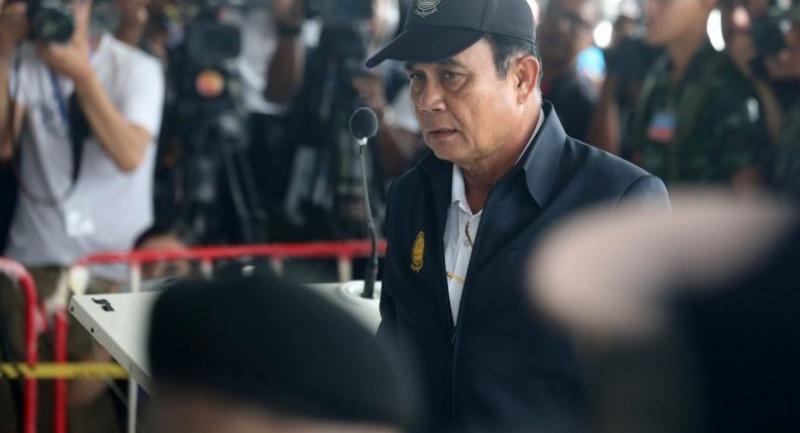 Prime Minister Prayut Chan-o-cha is in Phuket on Monday

His Majesty King Maha Vajiralongkorn will provide Royal assistance to the family of a rescuer who lost his life during the Tham Luang cave operation On July 6, Prime Minister Prayut Chan-o-cha said Monday.

General Prayut said the King will offer Royal grace to the family of Petty Officer First class, Samarn Kunun, 38, who “had the strong will to takes seven-hour dives for days, not realising that he could not physically endure it”.

The King has repeatedly provided support to the rescue operation. He ordered that a “Royal kitchen” be set up to cook food, and declared that all foreign rescuers be treated as his Royal guests. He also wrote letters to provide support to all of those joining in the operation.

Prayut also reiterated that the remaining nine team members must be rescued quickly and safely. “We can’t tell when exactly they will be brought out, but we will take the quickest way to make it no matter what method that is, whether they be by land, water, air or drilling all the way through the cave,” Prayut said.

To personally monitor the situation, the premier flew to Chiang Rai for an hours-long trip yesterday evening. He flew directly from Phuket, where he had gone to observe the operation to recover the missing people and bodies lost during a dive yacht’s tragic sinking.

The yacht named Phoenix sank last Thursday with 89 tourists, mostly Chinese, on board. As of press time on Monday, 37 tourists had been rescued and 41 bodies were recovered.

As he ordered local officers to impose stricter measures on boats and ships sailing out to sea, Prayut said that there is “no pressure” or any special messages from Chinese authorities due to the massive loss of Chinese lives in the incident.

“I told Chinese Ambassador [Lyu Jian] that Thailand and China are always siblings. We are regarded as the same country,” Prayut said at Aow Chalong port at Phuket’s Muang district.

While saying that he would not blame anyone in particular following the incident, Prayut said more damage could be anticipated if the tourism industry lacked “good practices and reviews” despite the increasing number of tourists.

“Tourism entrepreneurs have to cooperate with authorities and run their business legally for the true benefits,” he said. He suggested the yacht was found to be legally unfit to handle the large numbers of passengers it held and causing it to be overloaded and to eventually sink.

He also visited injured victims in hospital, where he pledged that the government would fully take care of their injuries. Bodies of the deceased would be returned to their home country once they are identified, he said.