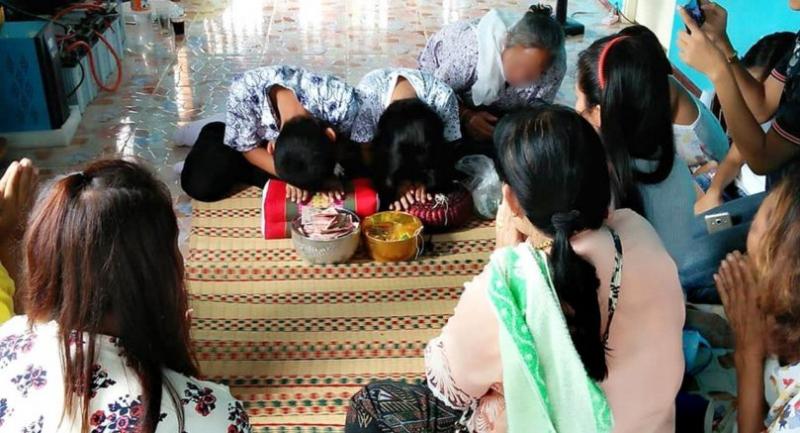 Girl, 14, and boy, 16, post photos after getting married in Thailand.

A middle-school teen, age 14, posted pictures of her and her newly-wedded husband, 16, at their July 8 marriage ceremony. The teens were said to come from the northeastern province of Chaiyapoom.

She captioned: “We got married because our families want us to do so. And actually isn’t age just a number? Although it is a humble marriage ceremony, this ceremony is extremely precious to us.

“Please be with me forever,” she wrote. “The dream that we won’t be apart or forsake each other has came true. I thought we had to wait for 10 or 20 years. Now it took only five or six months before it was realised.

“To have it fulfilled we have fought so hard and been through small disputes. Now we will never let go of each other’s hand,” she concluded.

But Jadeed Chouwilai, president of Women and Men Progressive Movement Foundation, expressed concern over the marriage. He said the sweet Facebook post was no guarantee that the marriage would be successful.

“Marriage needs time to foster. Couples need to get to know each other. Love alone cannot make a marriage last. I wonder if at this age the teen couple has enough life experience to understand that,” he said. Also, the girl’s assertion that age is just a number is not reflected under Thai law. The minimum legal age for marriage is set at 17 in this country.

“Authorities from the Ministry of Social Development and Human Security need to do something,” Jadeed added.

There are several reasons to be concerned about the marriage, he said.

“If the girl gets pregnant and stops going to school, that is the end of her education and she may be stuck in low-paying jobs. And if the marriage does not last, the girl may be left to raise her child alone.”

Women and Men Progressive Movement Foundation has worked with many survivors of domestic violence.

“Some people think that in the ‘upcountry’, families and communities will give a lot of support. But we have seen many domestic-violence cases in the upcountry. And domestic violence among teen couples like those at age 16, 17 or 18 is more prevalent than we think. If they cannot adjust to or deal with stress, this can lead to such problems.”