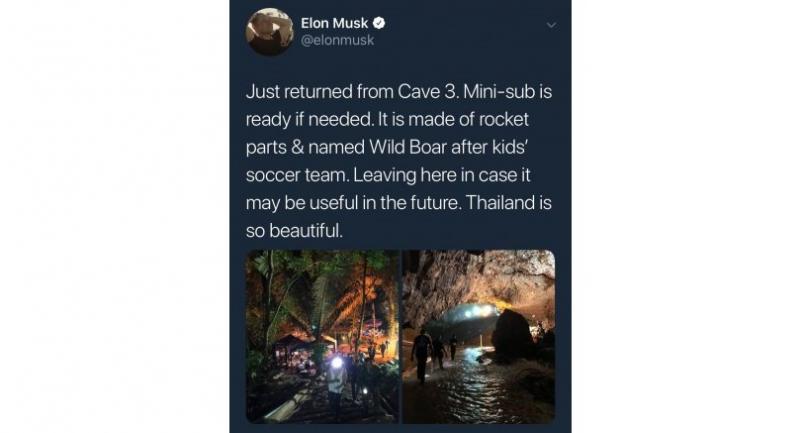 Prayut said yesterday that he had talked briefly with the American businessman at Chiang Rai airport during his visit to the northern province to follow up the operation to bring the Mu Pa academy footballers out of Tham Luang cave.

Musk flew directly from the United States and arrived in Chiang Rai on Monday night, a couple of days after his companies’ teams arrived to see how they could they provide technology to speed up the long rescue operation.

“[Musk] praised our operation and ability to control the scene. He is ready to support us with his technology,” Prayut said.

“They did go deep into the cave’s lobby. I asked him whether he could provide suitable equipment to help Thailand in future. He promised me [he would do so],” the premier added.

Prayut said that Thailand was ready to support Musk’s investment in the Kingdom, particularly on the hyped Eastern Economic Corridor (EEC) and regional connectivity.

“I told him about those and I think he was interested,” Prayut said. “He is looking at the EEC and is preparing satellite and communication projects. Why shouldn’t we seek matters of joint interest with them?” Among high-tech ideas for the rescue operation was a miniature submarine to help carry the weakened boys out of the partially flooded cave, inflatable tubes with airlocks, radar location technology from Musk’s Boring Company and SpaceX and a Tesla Powerwall battery pack to charge up all electrical devices in the cave.

The items will all be left in Thailand after the operation is over for study and research purposes, according to Prayut. This was confirmed by Musk, who tweeted yesterday morning that the “Wild Boar”, the mini-submarine named after the stranded football team, has been left “in case it may be useful in the future” in Thailand – which he called “so beautiful”.

The 47-year-old Silicon Valley billionaire had given updates via his Twitter account on his contact with Thai authorities, extending his staffs’ help, as well as developing and creating gadgets to use in the operation. “Primary path is basically a tiny, kid-size submarine using the liquid oxygen transfer tube of a Falcon rocket as hull. Light enough to be carried by 2 divers, small enough to get through narrow gaps. Extremely Robust,” Musk tweeted on Sunday.

The following day, he posted videos of the submarine moving in a swimming pool in Los Angeles. “With some mods, this could also work as an escape pod in space,” he said.

However, head of the rescue operation, Chiang Rai governor Narongsak Osotanakorn, noted that the submarine was not “practical for the mission”.

“The equipment is technologically sophisticated but they don’t suit our cave rescue” he said.