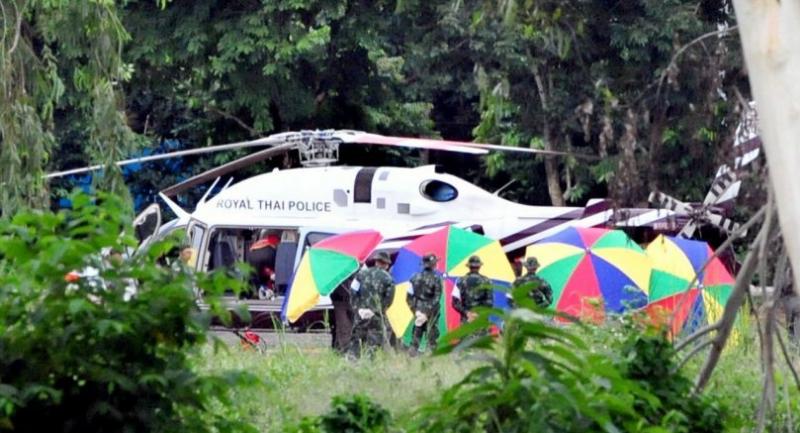 A helicopter is preparing to airlift another survivor of Tham Luang stranding, who had been stranded inside the flooded cave since June 23, to a hospital yesterday.

Rescuers lead final four boys and their coach to freedom.

“MISSION IMPOSSIBLE” was the term used to describe the complicated rescue operation at the flooded Tham Luang Cave. It culminated last night with the successful rescue of the last four of the 12 trapped boys and their football coach.

The success was announced after the final batch of stranded footballers was evacuated safely to Chiangrai Prachanukroh Hospital. The unprecedented mission was completed on the 18th day of an all-out rescue effort involving several countries from around the globe.

The whole world has been fixated on the unfolding drama at the cave complex in Chiang Rai province ever since news broke that flash floods had trapped 12 boys from a local football team and their coach on June 23. A Royal Thai police ambulance evacuates a cave trapped boy to hospital after he was rescued from the Tham Luang cave, Khun Nam Nang Non Forest Park in Chiang Rai province, Thailand, 10 July 2018. According to reports, all 12 boys of a child soccer team and their assistant coach have been rescued and evacuated to a hospital, 13 members of a youth soccer team including their assistant coach have been trapped in Tham Luang cave since 23 June 2018. // EPA-EFE PHOTO

However, when all 13 footballers were found alive at a dry spot about five kilometres from the mouth of the cave on July 2, a desperate race to extricate them before monsoon rains deluged the cave began.

The flooded Tham Luang cave was treacherous and the mission was not without its tragedy, with former Thai Navy SEAL Samarn Kunun perishing while replenishing air canisters in the cave for divers last Friday.

Some of the world’s best cave divers have gathered at the cave in recent weeks for the mission.

The evacuation required that the stranded survivors not just trek but also dive through muddy floodwaters, negotiating submerged passages that narrowed to less than 40 centimetres wide. The stranded were in safe and experienced hands, however; two specialist divers accompanied each of them through their difficult journey to freedom. Other support staff were also on hand to help ensure everything went smoothly. According to the rescue operation chief Narongsak Osottanakorn, the United Nations also dispatched many experienced divers to help.

Prime Minister General Prayut Chan-o-cha, who visited the rescued boys on Monday night, confirmed yesterday that the stranded footballers were given medication to prevent anxiety and panic – identified as a key danger – while being evacuated.

“But of course, they were conscious,” he said. “When I visited them, I also told them to be good citizens.”

As members of the evacuation team became increasingly familiar with the treacherous complex of Tham Luang, the evacuation operation reportedly became smoother and faster as days went by.

Yesterday, rescue planners brought all five remaining members of the stranded survivors out in less than nine hours. The youngest footballer, an 11-year-old boy, and the coach were in the last batch.

After their evacuation, the medic and three Royal Thai Navy SEALs who had accompanied the stranded team then made their way out.

The medic Army doctor Colonel Pak Loharachun, who was seen in a video clip with the stranded boys and reportedly stayed to take care of the group. An ambulance transporting alleged members of the children's football team approaches the hospital in the northern Thai city of Chiang Rai on July 10, 2018 after being rescued in Tham Luang cave. All 12 boys and their coach who became trapped in a flooded Thai cave more than a fortnight ago have been rescued, the Navy SEALs announced on July 10, completing an astonishing against-the-odds rescue mission that has captivated the world. // AFP PHOTO

As of press time, the first eight boys to emerge from the cave were in relatively good health but still in hospital. The first four evacuees had already removed their eye-protecting sunglasses and had started taking solid food.

All evacuees were blindfolded as they were moved from Tham Luang to the hospital, to protect eyes that had not seen sunlight for two weeks.

The successful rescue of the young footballers and their coach is a cause for joy not just their families but also for the countless number of people around the world who have been following the drama on television and other media.

Schoolmates of the rescued boys are also said to be excited about the prospect of welcoming them back.