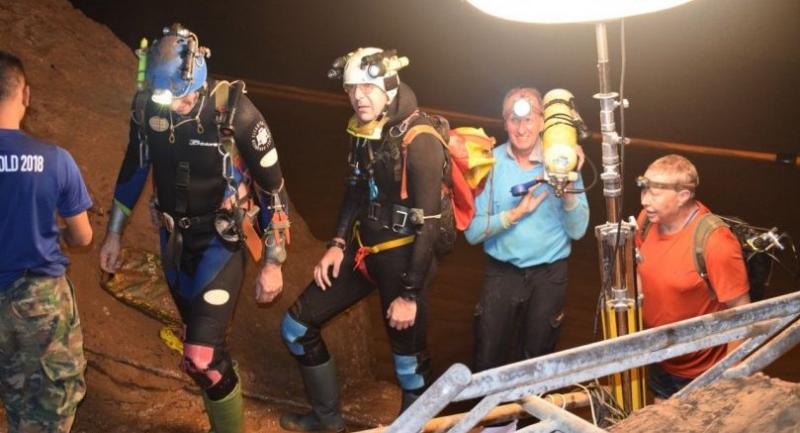 INVALUABLE HELP from international rescuers was behind the success of the extensive, widely-watched rescue operation that saved 12 boys and their football coach who were trapped in a Chiang Rai cave.

British cave divers John Volanthen and Richard Stanton were the first to find the footballers who had by then been trapped in the flooded cave for nine days, while an Australian cave diver Richard Harris made the call that they should be evacuated promptly despite early reports that the mission would be too dangerous for the boys. Harris, with a rare combination of expertise – diving and medicine – was the doctor to first assess the boys’ health and decided that the weakest boys should dive out of the cave complex first.

The physician hails from Adelaide in Australia and has chalked up decades of diving experience.

He joined the rescue mission at the request of Thai authorities who had been tipped off by the English divers already participating in the rescue.

Harris was among the expert cave divers who in 2011 faced the difficult task of recovering the body of another diver who died in Tank Cave near Mount Gambier in South Australia after she had run out of air.

He is also well known in the cave-diving community and led record-breaking missions to explore a dangerous underwater cave system on New Zealand’s South Island, according to the Sydney Morning Herald.

After all the trapped footballers had been escorted safely out of the cave, Harris is believed to have been among the last to leave the cave on Tuesday. Sadly, on emerging from the complex earlier this week he learned that his own father had passed away while he was in Thailand helping the boys.

As well as Harris, three Britons who joined the large-scale life-saving mission in the early days, played leading roles.

Among the world’s finest cave divers, Volanthen, Stanton and Robert Harper were contacted by Thai authorities.

Stantonis a world-renowned cave diver and former fireman. Volanthen and Stanton have participated in a number of cave diving rescue operations, including in Norway, France and Mexico.

The British divers were recommended to authorities by Vernon Unsworth, a diver from St Albans in England who now lives in Thailand. Already residing in a northern province, Unsworth years ago explored the Tham Luang cave complex, and as an experienced diver he knew exactly who to call to help in the operation.

Besides the western rescuers, the Thai cave mission also got support from an expert rescue team from Laos – Vientiane 1623 – who arrived at the cave on the first day of the emergency.

The group was founded in 2010 by a French former firefighter with the aim of providing emergency services around the clock.

Before that, Vientiane had no emergency and rescue units that worked 24 hours.

Working for free, Vientiane 1623 was awarded the Magsaysay prize in 2016 for its humanitarian mission.

The group afterwards expanded its rescue expertise to include cave rescues, as Laos has abundant mountains, rivers, cliffs, and caves both explored and unexplored. Vientiane 1623 became expert in rescues in natural and harsh environments.

Many other individuals from various countries took part in different areas of the operation. Japan fielded irrigation experts to help with drainage as water levels were a primary problem facing the rescue. Elon Musk, the CEO of Space X and Tesla, best-known for his inventive and tech-savvy qualities, also joined the mission.

He brought a mini-submarine to the cave, designed by top Space X engineers.

Musk had been in contact with the English divers that led the operation. In an email posted to his Twitter, one of the divers asked Musk to build a mini-sub that could be used, as the boys were weak and had no diving experience.

However, as the boys were finally rescued, the mini-sub was not used.

Musk said on Twitter that the popular governor was “not the subject matter expert” and that the |governor had been inaccurately described as the “rescue chief” when the British cavers had actually acted in that role.

Musk pointed out that the mini-sub had been specifically designed to pass through the critical narrowest point in the journey out of the cave, an area smaller than 40 centimetres wide.

Asked what was next for the mini sub, Musk said they could still be used for rescuing vulnerable patients in dangerous environments, particularly if water, toxic gas or dangerous bacteria or viruses were present.

Now that the mission has ended, Thailand’s Tourism and Sport Minister Weerasak Kosurat said Volanthen reportedly left Thailand yesterday and Stanton is due to leave today.