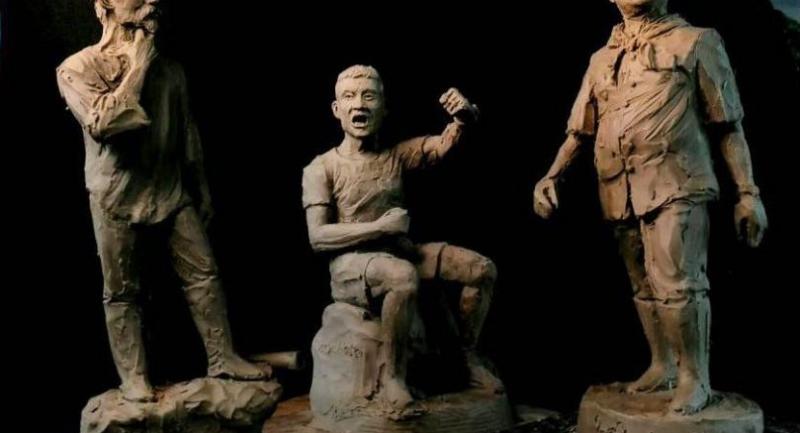 Thai and Indian artists are expressing their creativity to come up with monuments, sculptures and paintings honouring former Navy SEAL Petty Officer First Class Saman Kunan, who died during the rescue operation in the Tham Luang cave

On Saturday, Chalermchai and his team will come up with a huge painting at Krua Silpa Art Centre in Chiang Rai’s Muang district.

“I want to record this historic miracle with this painting. It will depict the complicated evacuation scenes where more than 1,000 international and Thai teams helped save the life of 13 members of a football team from the flooded cave,” he said.

The canvas will measure 3 metres by 13 metres, to coincide with the number of survivors.

If the National Park Wildlife and Plant Conservation Department gives permission, he plans to display the monument in front of the cave and the painting inside the cave.

Meanwhile in the Phimai district of Nakhon Ratchasima province, a candle carver Watchara Na-dee has created a special candle sculpture as a memorial for Saman.

He said the purpose of the sculpture was to honour Saman’s sense of duty, that played a role in all 13 lives being saved. He added that no one deserves this sculpture as much as Saman, who is our hero.

The 150cm candle was sculpted into an image of Saman, standing in a diving suit with an oxygen tank on his back. He spent five days carving the sculpture.

The candle sculpture dedicated to Saman is on display at Dem Temple and then will be sent to the Candle Sculpture Contest in Nakhon Ratchasima province during the Buddhist Lent Festival on July 27-28.

In Nakhon Pathom province, young artist Krisna Namulphol has been creating a 12-inch-sculpture of four rescue heroes, include Saman. The others are: Narongsak Osottanakorn, the chief of the operation, Surathin Chaichompu, the president of the Thai Water Well Association, and famous monk Kruba Boonchum Yannasangwalo.

Thailand’s hero Saman has also inspired celebrated Indian sand sculptor Sudarsan Patnaik. He sculpted portraits of Saman on the Puri beach in India with the message: “#ThaiCaveRescue: I pay tribute to diver Saman Kunan who died during the difficult cave rescue operations. My SandArt at #Puri beach in India with message RIP…True Hero”.