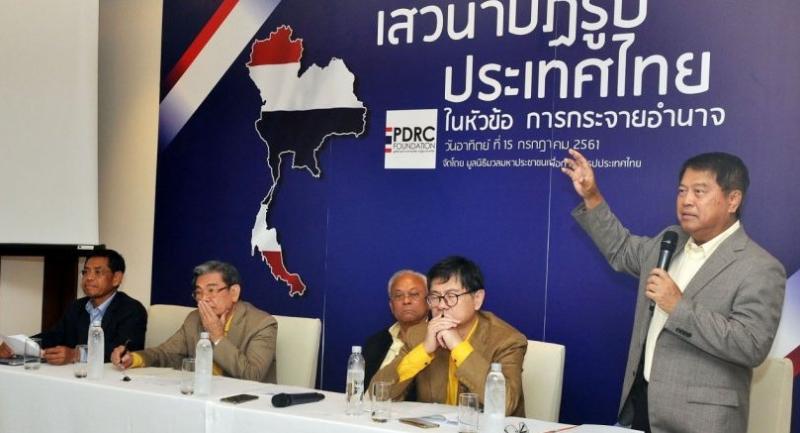 The right-leaning Action Coalition of Thailand party (ACT) is willing to join hands with “all parties with the same ideology” ahead of the next general election, co-founder Suthep Thaugsuban said on Sunday.

“We’re ready to cooperate with whoever has the same ideology and whatever party that shares the same views as us,” Suthep said. “This will give us the ability to reform the country and bring about full democracy.”

His remarks came as parties and politicians, most displaying support for the ruling junta, begin gathering voices with an eye to the election scheduled for next February.

Observers see the current Constitution setting out a new mechanism likely to hinder any single party from securing a parliamentary majority, but giving emerging parties such as the ACT a chance to gain a scattering of MP seats.

The ACT push for national reforms echoes that of the defunct People’s Democratic Reform Committee (PDRC), whose massive protests in Bangkok from late 2013 to mid-2014 led to the downfall of the Yingluck Shinawatra government and triggered the military coup in May 2014.

Post-coup, Suthep set aside his prominent roles behind the PDRC and People’s Democratic Reform Foundation (PDRF), occasionally making pro-junta comments, but in April broke a vow not to return to politics and joined the ACT.

The ACT has said little about its policies or whom it would support as the next prime minister. Suthep said all of this should become clear once an executive board is established and the party is formally registered.

Charas proposed that the ACT put itself forward as a core campaigner for decentralisation of the bureaucracy.

“Power in Thailand is centralised in national-level politics and bureaucrats and this does not exclude the ruling government,” he said. “This is a vicious cycle and a development trap.”

Provinces should become “special local administrations” similar to the way Bangkok operates, he suggested. Ultimately, local residents should elect their governors directly to four-year terms, ranked on a par with Cabinet ministers and subject to impeachment if found guilty of wrongdoing.

“Decentralisation will help reduce bureaucratic redundancy, especially in terms of the number of officials needed and the budget,” Charas said. “This system would also be more responsive to the specific needs of each province.”