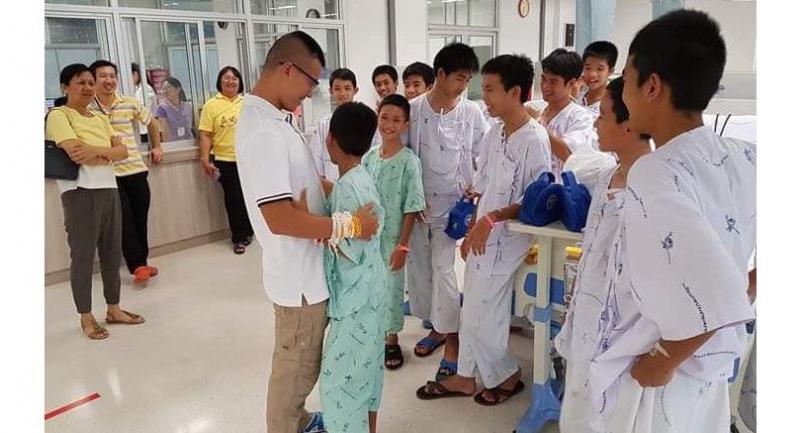 THE RESCUED Mu Pa Academy footballers and their assistant coach are aware of and have expressed their gratitude to those who made sacrifices to rescue them from the Tham Luang cave in Chiang Rai, said an Army doctor who played a leading role in helping the boys while they were trapped inside.

“I’m confident that the Mu Pa boys will grow up to be excellent citizens of the country and work for the benefit of the country’s future and reputation,” wrote Dr Pak Loharnchun in a Facebook post.

Pak praised assistant coach Ekkapol Chantawong for having “a good heart” and having made sacrifices to help and comfort the boys during their entrapment. The doctor, who has multiple certifications, including for SEAL operations, joined the footballers in the cave after they were discovered by British divers on July 2, and remained with them until the last of them was extracted on July 10.

Pak says the innocence and optimism of the boys impressed him, as did their remaining in high spirits during the time of crisis.

“I was told that after they were trapped inside the cave … every day they used pieces of rock to dig to find a way out despite having no food. The hole they dug was quite deep, about five metres.” They demonstrated discipline, collecting their rubbish and placing it in a black bag, he wrote.

They also listened to Ekkapol and followed his instructions, the doctor wrote. He told them not to pick up things or remove anything from the cave.

Ekkapol, 25, was the eldest of those rescued, while the rest were aged between 11 and 16.

“I secretly noticed since day one that the coach would make sure the boys ate first and he usually gave his portion to the boys,” the doctor said.

“I’m confident the coach took excellent care of the boys before they were located, as their mental and physical condition were way better than I had expected,” Pak said.

The doctor also posted photos of himself giving the boys goodbye hugs in Chiangrai Prachanukroh Hospital where they received medical care after being rescued. Pak and the other SEALs were discharged on Sunday while the boys are scheduled to be discharged on Thursday. Meanwhile Chiang Rai’s new Governor Prajon Pratsakul yesterday presided over a religious rite in front of the cave. The rite, attended by Buddhist monks, made merit for Lt-Commander Saman Kunan, the only fatality in the 17-day rescue operation. Phra Rattanamunee, a Chiang Rai chief monk, told parents of the footballers attending the event that the boys should enter the monkhood so that they could review their recent past and learn how to control their thoughts.

“If they know how to leave things behind and how to use concentration, they will effectively walk to the right path in the future,” the monk said.

A preliminary plan would see them ordained on July 27 at a Chiang Rai temple in Mae Sai district and remain in the monkhood for nine days.