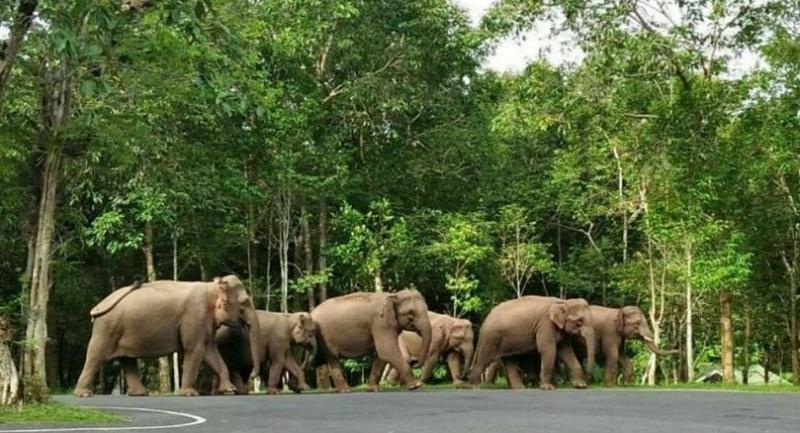 tusk tourismNine wild elephants cross a road inside the Khao Yai National Park, delighting passing tourist who quickly snap a picture of the huge mammal. Officials are on standby to ensure there are no confrontations between humans and wild pachyderm

With Thailand's forestland shrinking over recent decades, conflicts between humans and wild elephants have become increasingly visible – and sometimes deadly.

A few decades ago, Thais rarely saw the shy lumbering beasts as a threat.

But these days, scenes of wild elephants ravaging farmland, crashing into houses, confronting people and frightening motorists are increasingly commonplace. Statistics reveal that human-elephant conflicts have caused casualties on both sides between 2012 and 2018. tusk tourismNine wild elephants cross a road inside the Khao Yai National Park, delighting passing tourist who quickly snap a picture of the huge mammal. Officials are on standby to ensure there are no confrontations between humans and wild pachyderms.

There were 107 human and elephant victims over the period, resulting in deaths and injuries. Humans were the victims in 75 of these cases.

In trying to defend themselves from roaming wild elephants, people living near forestland are turning to electrified fences, traps and more. These measures have injured the big animals – which are widely seen as a symbol of Thailand – sometimes fatally.

At least 25 wild elephants have died because of contact with humans over the past six years. Electrified fences are the single largest cause of elephant deaths, accounting for 72 per cent of the fatalities. Electrocution by live wires on farmland, traps, poison and shooting are each responsible for 4 per cent of elephant deaths. Road accidents have caused the remainder.

Injuries to wild elephants have also been inflicted by traps, acid and human confrontation.

Humans have also suffered in the conflict. Over the past six years, at least 45 people have died and some 30 others have been injured in clashes with pachyderms. Human casualties have mostly occurred while people were trying to drive away the large mammals.

“Conflicts have now been detected in 41 sites where wild elephants are present, up from just 20 back in 2003,” says Dr Pichet Noonto, a researcher in a project addressing human–wild elephant conflicts and developing guidelines to solve the problem through community participation.

His research suggests shrinking forestland was a key cause of wild elephants increasingly venturing into human zones.

Each elephant needs an area of at least 100 square kilometres to ensure sufficient food. The gentle giants forage over a six-square-kilometre area each day. But when wild elephants run out of food in the available forest, they have no choice but to step beyond.

“Conflicts are most intense in Chachoengsao, Chanthaburi, Prachin Buri and Kanchanaburi,” Pichet explains. Research has documented a rapid rise in the number of communities raided by wild elephants in these provinces in recent years. The provinces encompass the country’s so-called Eastern Forest Zone, where wild elephants are pushing on into new ranges after about 18 months. Elsewhere, it takes between three to 11 years for wild elephants to start venturing out further in search of food. The Thailand Research Fund (TRF) started funding research into solutions for human-elephant conflicts more than two decades ago. Between 1997 and 2005, the studies focused on the exchange of experiences and search for solutions.

Driven by the findings, TRF and Wildlife Fund Thailand formed a collaborative network in 2003 to monitor and profile wild elephants that ventured beyond forest zones.

Between 2004 and 2007, local communities started playing a role in helping develop solutions and efforts to ease the conflicts. Since 2008, non-governmental organisations have worked alongside the government in addressing the growing threat from roaming pachyderms. Since 2014, the government itself has actively engaged communities on the issue.

Over the past few years, locals have drawn on accumulated knowledge and adopted new technologies to better monitor wild elephants and to assess which solutions for easing conflicts with humans are working.

While recognising that forest encroachment has worsened the problem, affected residents have said pachyderms should take some of the flak too.

According to some, elephant behaviour has changed to a point where they are raiding farmland, plundering trucks and invading people’s property for the taste of the food – not hunger caused by food shortage. On April 15 this year, a 30yearold elephant succumbed to electrocution after bumping into electrified fence inside the Ang Rue Na.

In Prachuap Khiri Khan province, truck drivers routinely watch out for the giant thieves because elephants from forests there are known to roam close to roads and target any vehicle carrying fruit they like.

Farmers have also reported that elephants will even smash down a cement wall in search of durian.

In a bid to counter wild-elephant raids, people have set up monitoring systems and electrified fences. Others have grown crops to feed wild elephants. They have also supported research and exchange of knowledge and experiences in the hope that the conflicts will lessen.

Environmental and wildlife networks, in collaboration with allies and corporate sponsors, have also ventured into forests to create artificial salt licks in the hope that wild elephants will not venture into human zones.

Researchers, meanwhile, are continuing their quest to find effective solutions to stop the conflicts and foster mutual co-existence.