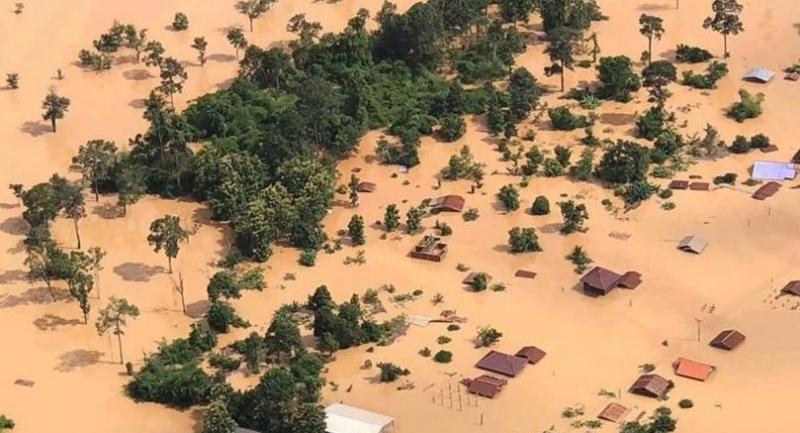 More than 3,000 require rescue from floods in Attapeu province, Sanamxay district governor reported at 10:30am today.

He said that about 2,851 victims had been reported rescued from yesterday until this morning from locations in Sanamxay district, Attapeu province.

More would require rescue from trees and the roofs of houses, district governor Mr Bounhom Phommasane told Vientiane Times via mobile phone."A second step for us will to recover and identify the deceased, but for now we hurry to find those who are still alive in the area," he explained.

Seven villages and dwellings home to about 1,300 families and over 6,000 people were under water and nearly half of the affected persons have yet to be rescued or otherwise accounted.

About 19 people have been found dead, and 49 believed missing from the incident, according to unofficial reports from Attapeu Administration office this morning.

There would be no opportunity to confirm these numbers officially until the rescue of survivors is complete, an official from the office said.

The flood accident occurred after a partial collapse of saddle dam D at the reservoir of the Xe-Pian Xe-Namnoy hydropower project on Monday evening.

The administration officials announced that the accident occurred Monday evening, causing waters to breach the damn wall and proceed down the XePian river basin to flood houses and lands in seven villages of the district.

Rescue teams from around the province, from the capital and around the nation have been joined by those of regional neighbours and other countries lending assistance.

To offer donations to flood victims in need urgent of assistance, please contact this information below:

The Attapeu provincial Administration Office is appealing to entrepreneurs and people from Laos and abroad to donate clothing, food, drinking water, medicines, cash and other necessary items to assist flood victims in Attapeu province.

When:  Public donation opens from now