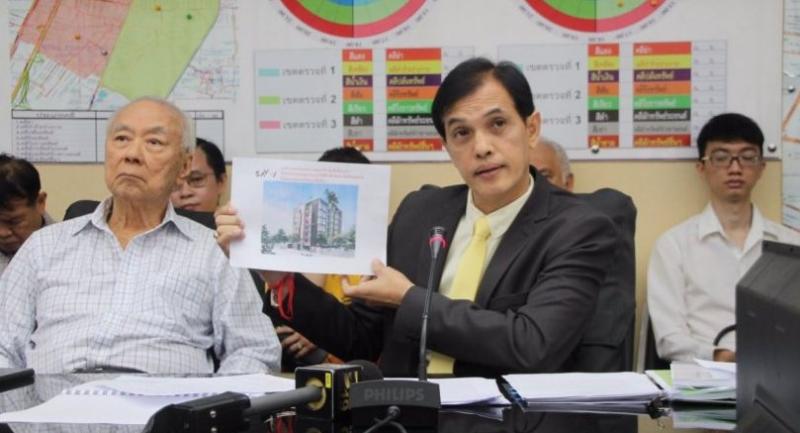 A Bangkok conservation association will have to wait to hear whether their attempt to file a complaint with police on Thursday will result in a probe against the Phayathai District director and others over what the conservationists see as an “illegal” omission of their duties, by issuing permits for construction of an eight-storey “tall” building in the community.

About 10 representatives of the Phayathai Conservation Association, led by their president Norarit Gomalarachun, 85, submitted documents to officers at the Bang Sue Police Station to back up their complaint. The police requested additional information from Norarit before deciding whether to take up the case. Seven warning letters against the locally controversial project, and a letter detailing how the residents would be affected if the project proceeded, were presented to deputy superintendent Pol Lt-Colonel Saman Khlongsin. Saman said police would gather testimony and evidence to forward the case to the Office of National Anti-Corruption Commission within 30 days.

The move followed an April 5 meeting between Ombudsman’s Office secretary-general Rakkecha Chaechai, related officials and Phayathai community residents at the Phayathai District Office. The residents objected to the construction of tall buildings in their community. At the meeting, lawyer Anantachai Chaiyadej represented the association in warning that if a construction permit was later issued, he would file complaints against the officials involved.

According to Anantachai, the district director on May 15 approved a construction permit for an eight-storey apartment project in Soi Chamnan-aksorn, despite several opposing letters from the association and opposition from locals who say it would affect their well-being and the environment. He said the proposed project, with proposed underground parking, would span 180-square-wah (720-square-metres), had no Biotope Area Factor (BAF) to grow trees as required by the law, and hence violated the Bangkok City Plan 2013.

Anantachai said the project had no plan to support large vehicles or for storage of tools and materials during the construction period. The dead-ended soi is 8 metres wide and 150 metres long and lacks a footpath, and so the project would likely encroach on public space during construction, he said.

With 50 current residents, the soi could not support a four-time population increase once the building was completed and people had moved in.

He said the association, in its latest letter sent on July 4, has asked the district director to revoke the permit within seven days or they would proceed with legal actions, but that was also ignored.