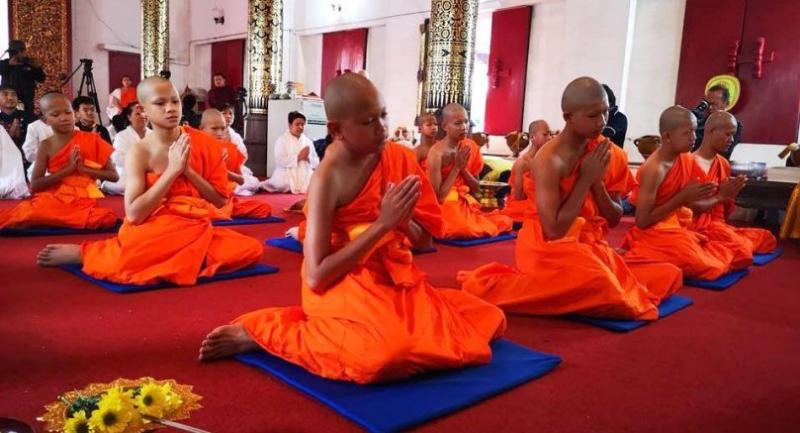 By Nathawat Laping
The Nation

As the 12 members of Mu Pa football team began their first day of Buddhist monastic routines at Chiang Rai's Wat Phra That Doi Tung on Thursday, Chiang Rai Primary Educational Service director Kittichai Muangma revealed his plan to teach the 11 novices at the monasteries so they could catch up with classmates.

His office spoke to the boys' schools while they were still trapped in the flooded Tham Luang cave about tutoring so they could catch up with their peers.

Kittichai said the novices would be provided with maths, science, English, Thai and social studies lessons plus homework when not practising dhamma at Wat Phra That Doi Wao.

After the novices leave the monkshood on August 4, the tutoring would continue to ensure they did not fall behind. For the first period when they return to school, they would also study during the weekends, Kittichai said.

Coach Ekkapol Chantawong, now a monk with the monastic name "Wisarntho" (the wise and brave one) derived from his role in helping the boys survive, will complete the three-month "pansa" rain retreat. The 11 novices and Phra Wisarntho, appearing cheerful and smiling, made the morning alms-collecting round for which many residents and 10 friends gave offerings before they continued to perform prayers and meditation.

Acting abbot of Wat Phra That Doi Wao, Phra Khru Prayut Jetiyanukarn, later in the morning picked up the 11 novices and Phra Wisarntho from Wat Phra That Doi Tung so that the group can continue the monastic routines at his temple, as previously planned.