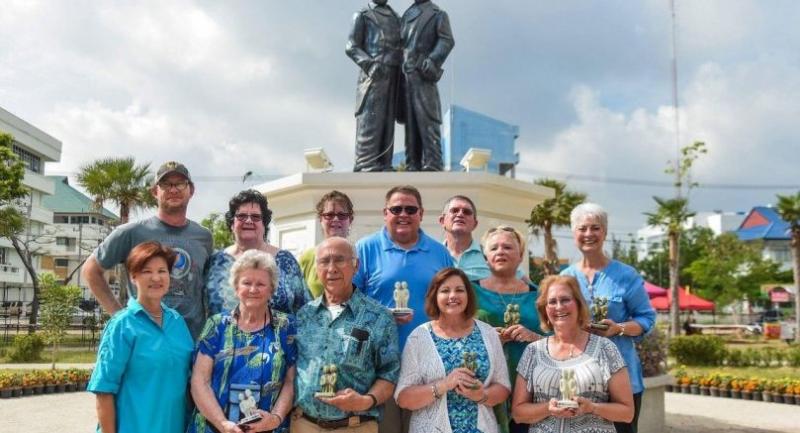 Thailand’s Foreign Ministry invited the American descendants of Siamese twins Chang and Eng to make their first official visit to Samut Songkram – the twins’ homeland – as part of the celebrations marking the 207th birthday of the Siamese Twins.

The connection between Thailand and the US has been strong for more than two centuries – indeed Siam, as it was then, was the first Asian country to forge formal diplomatic relations with the United States.

European countries like France, Portugal, Britain and the Netherlands arrived in Siam in the Ayutthaya era long before the first known American to visit – a ship captain – came ashore in 1818. Yet in diplomatic terms, Siam appears to have placed more confidence in the US than in other countries, appointing a former US diplomat to represent the Kingdom of Siam at the International Peace Court to conclude treaty negotiations with the West.

Relationships were further cemented after World War II and in the early 1960s Thailand became the military base for American troops fighting the Vietnam War. Indeed Thailand even committed troops to assist the war effort in Indochina.

The American influence further spread during this years, with Thailand becoming deeply immersed in American pop culture including film, music, art and education.

But with the East Asia economic boom and tighter relationships within Asean, the deep roots of American pop culture in Thai society are now showing signs of wear and Thailand is increasingly engaging with her neighbours, Thai scholars observe.

“The 1970s saw many changes. It was a decade that was pivotal in world history, especially the economic upheavals following the end of the post-war economic boom. Since 1970s the world’s capitals have shifted from America to Japan, China and Europe, so the American influence started to decline, but it still has deep roots in Thai society,” says Asst Professor Yukti Mukdawijitra, a lecturer at Thammasat University’s Faculty of Sociology and Anthropology.

“The economic boom in the late 20th century and early this century has seen Japan and South Korea exporting their soft power – J-Pop and K-Pop to Thailand. More recently we have seen a boom in Chinese tourists. East Asian cultures are forming exchanges among themselves and the Chinese language has become popular among Thais,” says Yukti who earned her master’s degree from University of Wisconsin-Madison in the US.

So have Thailand and the US maintained the close relationship of the past?

Two centuries ago this year, American naval captain Stephen Williams docked his ship in the port of Bangkok in the hope of launching trade between his country and Siam. The mission was a success, and Williams returned home with a letter addressed to President James Monroe from Dit Bunnag, Siam’s foreign minister, conveying the approval of King Rama II.

Since then the two nations have maintained an amicable relationship that counterbalances to a large extent the powerful influences of China. To further strength the relationship, the American Embassy hosted the major exhibition “Good and Great Friends” in March. His Majesty King Maha Vajiralongkorn presided over the opening of exhibition at the Queen Sirikit Textile Museum, which features nearly 80 gifts exchanged between the country’s heads of state and delegations over the past two centuries of bilateral relations.

Meanwhile Thailand’s Foreign Ministry invited the American descendants of Siamese twins Chang and Eng to make their first official visit to Samut Songkram – the twins’ homeland – as part of the celebrations marking the 207th birthday of the Siamese Twins in May. It was a significant symbol of the longstanding cordial and close relations between this country and the United States at the people-to-people level.

“The Siamese twins Chang and Eng travelled to the US even before the establishment of our relations. They are the first known Thais to have set foot in the US. Moreover, they realised the ‘American Dream’. They were not only very successful in business, they also were the first Siamese to connect people between the two countries,” says Sarun Charoensuwan, director general of the American and South Pacific Affairs Department.

Scholars also note that the most important foundations Americans laid down in Thai society are modern education, technology and the liberal attitude that lead to democracy society.

“American missionary Dan Beach Bradley, who moved to Siam in 1835, was among the key figures to lay key foundations here. He introduced American education, modern medicine, science and technology in Thailand through the Kingdom’s first press printing and English newspaper, the Bangkok Recorder, as well as the first English-Thai dictionary,” respected history professor of Thammasat University Thanet Apornsuwan tells The Nation.

“As American knowledge is practical, it greatly influenced the elite and middle classes of that generation and that sentiment has been passed down through the generations,” adds Thanet.

Yukti agrees. “Despite the current craze for K-pop and the close interaction with our Asian neighbours, American films, music and fashion are still easy to engage with so they remain popular,” he says.