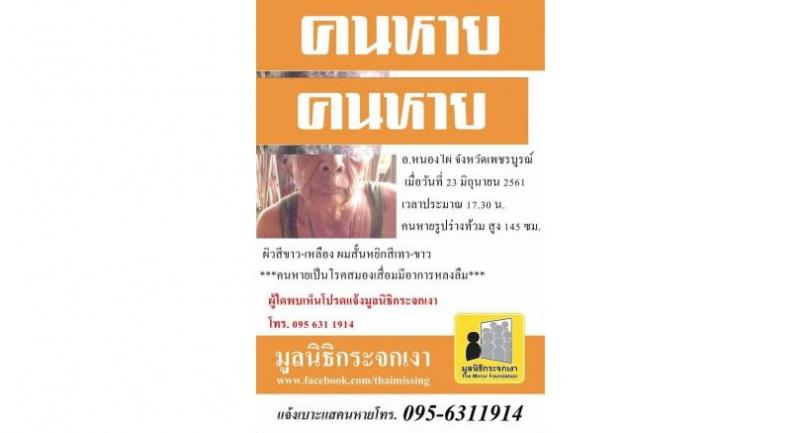 Embedded with a QR code, each bracelet will contain information about the wearer and their family. But to protect them from information leaks and ill-intentioned people, the Mirror Foundation and its allies have made sure that only the foundation can read the QR code.

About 1,000 bracelets are now being produced through the project, which is headed by the Mirror Foundation with support from True Cooperation, MEDiD Corp, and Energetic Electrical Engineering Co Ltd.

Earlier this year, a woman aged about 70 went missing. She was driving a car from Hua Hin to Bangkok, but temporarily lost her memory on the way. Luckily, her relatives knew the car’s plate number and contacted a JS100 radio channel to help by broadcasting it. Two days later she was found at a gas station in Suksawat by three taxi drivers.

According to Eaklak, most missing seniors tend to wander the streets for days until they collapse and are taken to hospital. And while 90 per cent reunite with their families, the rest remain in limbo.

To combat the problem, many brands offer bracelets with QR codes. However, the code often discloses private information, such as the family address, phone number or medical information. The Mirror Foundation staff said it was a double-edged sword and an infringement on privacy.

“If the bracelet is lost or falls into the wrong hands, the information may be used to commit crimes,” said Eaklak.

Also, passers-by – with good intention – may scan the code, take a picture of it, and post the private information on social media, he added.

The Mirror Foundation bracelets work differently. When the QR code is scanned, the bracelet sends the wearer’s location directly to the foundation’s staff so they can send help and contact relatives. “The person who scans the QR code will not see the names, blood group or address of the patient. They will be instructed to deliver him or her to officials’ hands,” Eaklak said.

Next month, the first 1,000 wristbands will be given to elderly people with previous records of going missing from home. Those who wish to get a wristband must show a doctor’s certificate. Also, all recipients must register with the Mirror foundation.