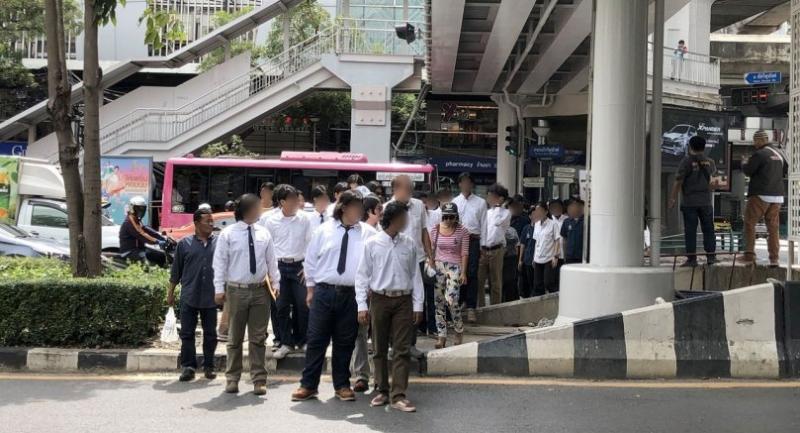 About 50 students marched from their university to the Royal Thai Police headquarters in Bangkok on Friday to demand action against persons attacking their friends.

Since 2014, there have been at least seven attacks, resulting in three deaths, on students from Rajamangala University of Technology Tawan-ok: Uthenthawai Campus.

Thanit Kanlahasunthorn was one of the fatalities. His father jumped to his death from Bangkok Criminal Court building last month after the only suspect in Thanit’s murder was acquitted.

“Attackers will be emboldened if police cannot nail them down,” a marcher said on condition of anonymity.

He said that his group had gathered information on the attacks to help investigations.

“We believe the attacks are related to the sense of rivalry among students from another educational institute,” he said.

In Thanit’s case, there were two defendants – one is an adult while the other is a 16-year-old juvenile. The teenage suspect previously pleaded guilty to fatally stabbing Thanit at the Central Juvenile and Family Court, which handled his case because of his young age.

The adult suspect, Nattapong Ngern-khiri, was acquitted due to insufficient evidence. That acquittal verdict made headlines because it drove Thanit’s father to commit suicide.

Pol Colonel Tanawat Wattanakul, a deputy commander of the Royal Thai Police, accepted the petition from the students on behalf of National Police chief Pol General Chakthip Chaijinda on Friday, and assured them that police would closely monitor the progress of the case.

“We have heard that parents are becoming really worried because the new semester is about to start,” he said.

In a related development, Deputy Metropolitan Police Commissioner Pol Maj General Sompong Chingduang said his team had already talked to public prosecutors and found that it is possible to appeal against the Nattapong’s acquittal.

Sompong, who was named the head of the team to investigate Thanit’s case following the suicide of his father, said his team would not launch a fresh probe but check if the original investigation report was flawed.

“If flaws are found, policemen in charge of the case will face disciplinary actions,” he said.