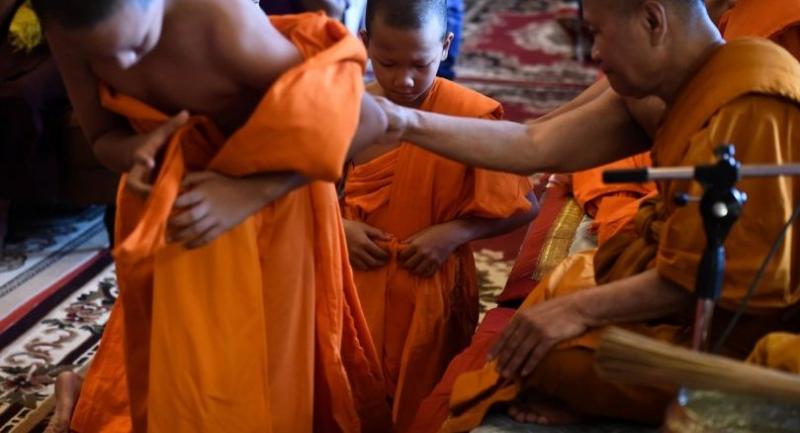 Members of the "Wild Boars" football team are derobed by Buddhist monks during a ceremony to mark the end of the players' retreat as novice monks at the Wat Phra That Doi Tung temple in the Mae Sai district of Chiang Rai Saturday.//AFP

Eleven “Wild Boar” footballers left their nine-day ordination as Buddhist novices on Saturday morning, in which they made merit for their hero, an ex-Navy Seal who died during their rescue from the Tham Luang cave in Chiang Rai.

Eleven of the 12 previously trapped footballers, plus their assistant coach, undertook the ordination. Footballer Adul Samon, who spoke in English to the British divers when the group was discovered, is a Christian.

The 11 Mu Pa novices took part in a rite to leave the ordination at 9.20am at Wat Phra That Doi Wao in Mae Sai district of Chiang Rai province.

The assistant coach did not leave his monkhood, deciding to instead remain ordained thoughout the three-month-long Buddhist Lent.

The 12 chose to be ordained to make merit for Lt-Commander Saman Kunan, 38, who died in the cave on his way back from delivering oxygen tanks to the Mu Pa team.

The boys were found 10 days after they went missing on June 23 in the flooded Tham Luang cave in Mae Sai. Saman was the only casualty in the 17-day multinational operation which captured the world’s attention.