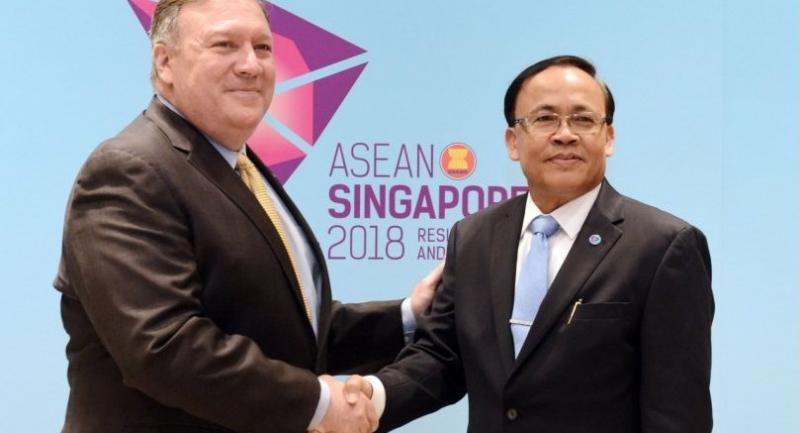 US Secretary of State Mike Pompeo Saturday called on his Myanmar counterpart to release two Reuters journalists accused of breaking a draconian secrecy law during their reporting of a Rohingya massacre.

Myanmar nationals Wa Lone, 32, and Kyaw Soe Oo, 28, have been detained since December and face up to 14 years in prison for possessing classified documents linked to security operations in crisis-hit Rakhine state.

Pompeo said in a tweet that he had raised the issue with the Southeast Asian country's foreign minister at a regional security meeting in Singapore.

"I spoke with #Burma's Minister Kyaw Tin and raised US concerns about 2 @Reuters reporters detained in Burma for doing their job. They should be released immediately," he said, using the former name for Myanmar.

The journalists were arrested while reporting on a military crackdown against Rohingya Muslims in Rakhine which the United Nations and Washington have described as ethnic cleansing.

They had been investigating the extrajudicial killing of 10 Rohingya men in the village of Inn Din -- a massacre in which the military eventually admitted involvement.

During the pair's ongoing trial, Kyaw Soe Oo said last week he had been entrapped by police while reporting on the massacre with his colleague and had been abused in custody.

Northern Rakhine state has been in virtual lockdown since the military campaign began last August and forced some 700,000 Rohingya to flee to neighbouring Bangladesh.

Doctors Without Borders estimates that at least 6,700 Rohingya were killed in the first month of the bloody crackdown alone.