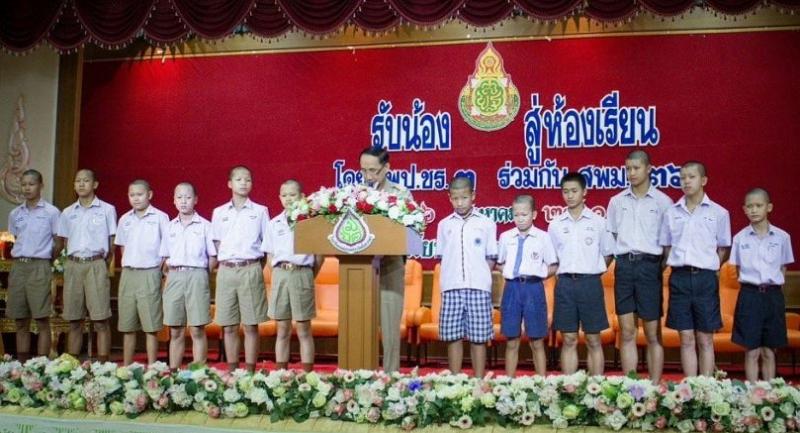 A BLESSING ritual was held on Monday to welcome 12 young footballers – who had been trapped inside the flooded Tham Luang cave for more than two weeks – back to their studies.

Aged between 11 and 16 years old, the schoolboys are members of the Chiang Rai-based Mu Pa Academy Mae Sai, known as the “Wild Boars”.

“We have had concern for the boys. Now we will bring them back to school as soon as possible. We will also provide them with tutorial courses to help them catch up with their classmates,” Deputy Chiang Rai Governor Somboon Sirivej said. A classmate of one of the rescued boys said: “I am so happy that my friend is back. When he was trapped, I was so worried about his safety. I will help him where I can with classes that he has missed.”

During the ritual, which took place at Maesaiprasitsart School, the rescued boys received holy threads of blessing. They were also given a free set of learning materials and football shirts of Bayern Munich, which sent the team shirts after hearing news of the boys’ being trapped and eventually rescued. A video clip showing they were still alive inside the cave, 10 days after they went missing, caught worldwide attention. Though they were trapped inside the cave without food and little light, they remained calm and cheerful. The 12 schoolboys and their assistant coach visited the Tham Luang cave in Chiang Rai province on June 23 on a sightseeing trip. But they ended up being stranded inside after a flash flood blocked their exit.

Rescue operations began the following day and the search team soon expanded to about 10,000 people from various nations including Britain, Australia and China. While the effort culminated in the safe rescue of all 13 footballers, it claimed one life. An ex-SEAL, Saman Kunan, died during a diving operation inside the cave. His sculpture is now being cast at the Rongkhun Temple. National Artist Chalermchai Kositpipat and distinguished sculptor Sarawut Khummoonchai are among key contributors. “It’s now more than 60 per cent complete,” Sarawut said.

Even though the sculpture is not yet complete, it has attracted much attention from tourists visiting the Rongkhun Temple.