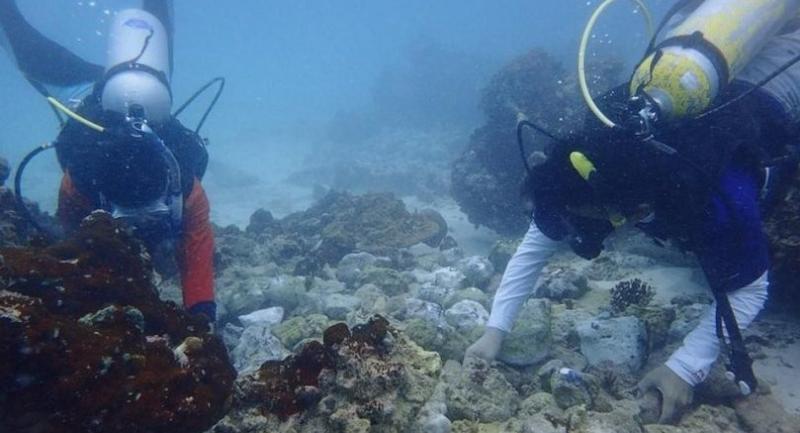 EFFORTS to restore coral at Maya Bay have been hampered by a strong monsoon and rough sea conditions, resulting in the survival of only 10 per cent of replanted coral.

Two months ago the bay area – one of Thailand’s most famous tourist attractions at Had Nopparat Tara- Mu Ko Phi Phi National Park in Krabi – was closed to all visitors in an effort to re-grow the heavily damaged coral reef. The transplanting operation has not met expectations, says the National Park, Wildlife and Plant Conservation Department (DNP). However, other efforts to restore the environment and plan for properly managed tourism activities are going according to plan.

The bay was closed to all tourism activities on June 1, following an agreement between the DNP and local tourism operators. It is hoped that the four-month closure will heal some of the environmental damage to the bay and the surrounding area caused by excessive tourism.

Maya Bay once had a large, colourful, and biologically diverse coral reef. But heavy boat traffic in recent years, combined with excessive tourism activities nearby, have nearly annihilated the entire coral reef. A key part of the recovery effort is aimed at regenerating the coral reefs lying just metres under the waters of the beach, which became famous as the location for the 2000 film “The Beach”.

Park officers and marine biology experts are working hard to encourage regrowth of the rich marine ecosystems and allow the natural beauty to again bloom for the reopening in October, says Worapoj Lomlim, chief of Had Nopparat Tara-Mu Ko Phi Phi National Park.

Worapoj says that, so far, the officers have achieved satisfactory progress on the natural regeneration on land. However, the underwater part of the operation has faced major problems from strong monsoons and rough seas, which have damaged most of the replanted coral and eroded the bay’s signature white sandy beach. The team has successfully replanted 512 colonies of coral in the bay, says Thikamphon Wongthawatchai, a marine biologist at Marine National Parks Operation Centre 3, who was worked on the coral reef restoration since the operation began.

“We replanted corals by collecting the living branches of broken corals from nearby areas and then attaching them to rocks, which we placed on the sandy floor of the bay, so the corals would grow,” Thikamphon explained.

“However, the unexpected strong waves during this monsoon season have washed the corals from the rocks and buried them in the sand, so most of the replanted corals died. Only around 10 per cent of corals, which were replanted deep enough to escape the force of waves, survived.”

Despite the high mortality rate of the replanted coral at Maya Bay, he says there was still hope for restoring the bay’s coral reef.

Even after the bay reopens to visitors in October, all boats are prohibited from entering the bay. Saved from the daily assault of boat traffic, the coral reefs might naturally regenerate and gradually recolonise the bay to their previous abundance.

Thikamphon said the coral replanting task would continue until October. Having learned from the mistakes of the first two months, the team was confident that future patches of replanted coral would have a higher survival rate.

Meanwhile, on the issue of managing tourism after the bay reopens, Worapoj says the national park would not allow boats to enter the bay and tourist boats will be required to dock at a new floating pier in Loh Sama Bay. Passengers could reach Maya beach from the rear.

“We have not decided on the final plan of the new pier yet, but … the pier will be a floating pier, which would be large enough to moor eight boats at a time. There will be no solid structure built into the sea,” he said.

“We also have a plan to limit the number of tourists at Maya Bay, but we have not reached a conclusion on this issue yet.”