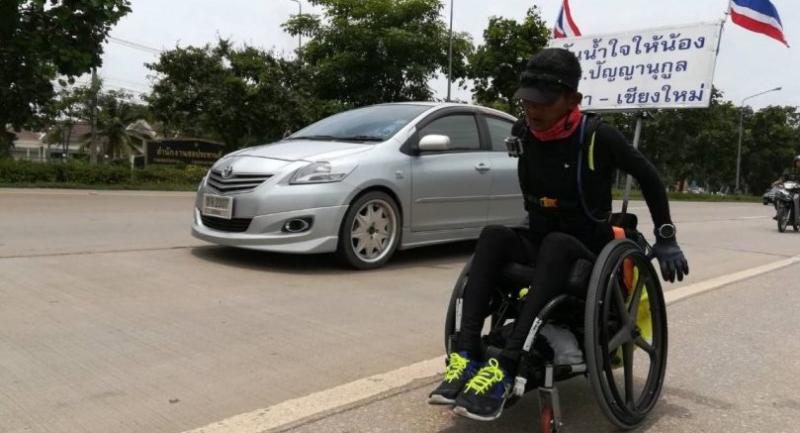 With only some 200 kilometres to go to complete his 1,400-km journey, a 55-year-old wheelchair-bound Phitsanulok man has accepted that he will not be able to meet his target of raising Bt4 million for 48 schools for disabled children nationwide.

He arrived at Naresuan University at noon and moved his wheelchair along Siharaj Dechochai road to downtown Phitsanulok to accept donations at Khok Matoom in the evening.

Sathit said when he started his 1,400-km journey in June that he hoped to get donations of Bt4 million to share among 48 Panyanukul schools around the country.

He now realises he will not be able to meet the target, but no matter how much he has raised by the end of his trek, he will give all the money to the schools, he said.

He will undertake the next leg of his journey, to Sukhothai, on Wednesday morning.

Each day of the journey, Sathit – who is accompanied by several runners – covers at least 30km by hand-spinning his vehicle’s wheels, which is a gruelling task.

As a non-celebrity, Sathit has said he just hoped that people found his campaign inspiring and would join his cause to help disabled children.