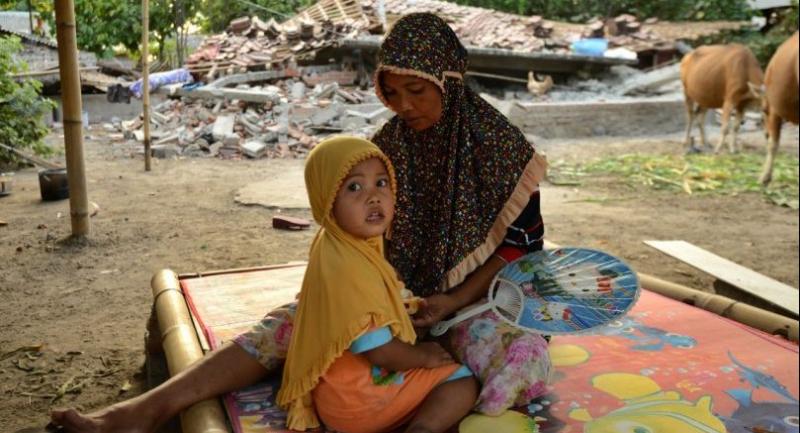 This picture taken on August 8, 2018 shows a woman and her daughter sitting in front of their damaged house in Kayangan subdistict in north Lombok on West Nusa Tenggara province, three days after an earthquake hit the area./AFP

The death toll from a devastating earthquake on the Indonesian island of Lombok has risen above 160, an official said Thursday, as authorities urgently appealed for medicine, food and clean water for some 156,000 people displaced by the disaster.

Many frightened villagers are staying under tents or tarpaulins dotted along roads or in parched rice fields, and makeshift medical facilities have been set up to treat the injured.

Evacuees in some encampments say they are running out of food, while others are suffering psychological trauma after the powerful quake, which struck just one week after another tremor surged through the island and killed 17.

Tens of thousands of homes, businesses and mosques were levelled by the quake, which struck on Sunday as evening prayers were being said across the Muslim-majority island.

Local authorities, international relief groups and the central government have begun organising aid, but shattered roads have slowed efforts to reach survivors in the mountainous north of Lombok, which bore the brunt of the quake.

"We are still waiting for assessments from some of the more remote areas in the north of the island, but it is already clear that Sunday's earthquake was exceptionally destructive," Christopher Rassi, the head of a Red Cross assessment team on Lombok, said in a statement.

He estimated 75 percent of houses are damaged in some villages in east and north Lombok.

"There are still some evacuees that have not yet been touched by aid, especially in North Lombok and West Lombok," Nugroho tweeted Thursday.