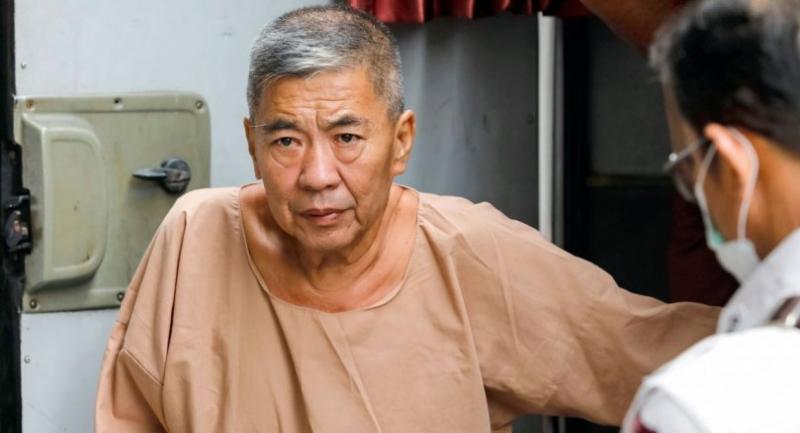 Malaysian drug suspect Tan Hun Seong arrives to face trial in Bangkok on August 16, 2018 for his alleged involvement in smuggling of more than 200 kilograms of ice to Malaysia. //AFP PHOTO

A Malaysian drug dealer dubbed the "Iceman" was sentenced to death Thursday by a court in Thailand after he was convicted of running a narcotics network that funnelled huge profits into legitimate businesses.

Tun Hung Seong was arrested in April last year after a tipoff that he had hired a man to smuggle nearly 300 kilogrammes of crystal meth -- known as ice -- through the violence-scarred south.

Investigators believe he acted as a gatekeeper to the Malaysian drug market just over the border and laundered money through karaoke bars, hotels and restaurants.

All four were sentenced to death, although the sentences of the Taiwanese man and one of the Thai women were reduced to life imprisonment due to their "useful" confessions.

Situated along the drug-running routes of the "Golden Triangle," Thailand provides overland routes for the smuggling of meth from factories in lawless parts of neighbouring Myanmar and Laos, in a trade estimated to be worth $40 billion a year.

Drug seizures across the region have shot up to record levels in recent months.

Malaysian authorities in May said they seized a record 1.2 tonnes of crystal meth from Myanmar hidden in tea packets, believed to be the largest ever in the country in terms of value and weight.

Thailand torched more than six tonnes of narcotics in June, most of it meth.

From October to July this year, some 1,705 drug cases were reported in the kingdom, compared to 453 in the same period the year before.

Suspects convicted of serious drug offences face harsh sentences in Thailand in one of its many overcrowded prisons.

The country carried out its first execution since 2009 in June, after previously sending signals it would abolish the practice.