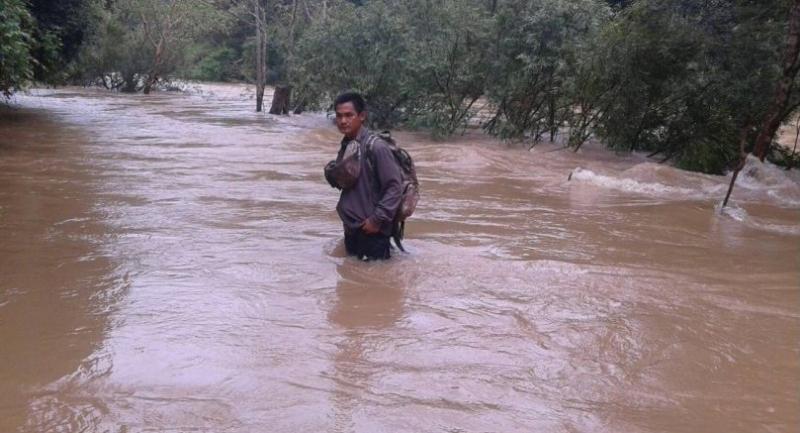 THE AUTHORITIES say they are well prepared for tropical storm Bebinca, with disaster prevention and mitigation teams now in full readiness and with the water levels lowered in every dam on the storm’s path.

This will leave room for greater water inflows.

The Meteorological Department yesterday issued a weather warning, saying the storm will bring heavy downpours throughout the upper regions of Thailand and may trigger flash floods in some areas today and tomorrow. Meteorological Department director-general Wanchai Sakudomchai said the storm was forecast to make landfall in north Vietnam today, before moving westward to northern Laos and weakening into a tropical depression tomorrow.

Wanchai said that though Thailand is not in the storm’s direct path, it would have an impact nationwide from yesterday until tomorrow. He explained that the storm would bring a very large volume of precipitation to the upper part of the country, especially in the North and Northeast, while also empowering the monsoon and so causing heavier than usual rain in the South, West and East of the Kingdom.

People should therefore be on alert for flash floods and overflowing rivers, the Meteorological Department warned. Closely monitor the precipitation levels and follow updates from the authorities, they said.

The RID deputy director-general for operations and maintenance, Thaweesak Thanadachopol, said people should be alert but not panic during this period.

He also gave assurances that the department was properly managing the water in all reservoirs to relieve the flood situation and prevent overflowing dams, as well as to prevent major disasters.

“The RID officers have been working hard to carefully plan the amount of water stored in each reservoir to ensure proper water management and prevent disasters,” Thaweesak said.

“So most of the dams in the affected areas of tropical storm Bebinca are ready to receive large water inflow brought by the storm,” he added.

Thaweesak emphasised that all major dams in the Chao Phraya River Basin had the appropriate level of water and there is enough room for additional inflows for the rest of the rainy season.

Water in the country’s West remains a concern, according to the RID’s real-time water data. The Kaeng Krachan Dam in Phetchaburi and Vajiralongkorn Dam in Kanchanaburi, are already overwhelmed and their water inflow rate has surpassed their water drainage capacity due to the precipitation brought by stronger monsoon. The added inflow is causing the water levels in these dams to rise close to dangerous levels.

Asked about the two western dams, Thaweesak replied that there was a plan for them to get more water than their official storage capacity. The two dams are now being closely monitored and carefully managed by RID, so people downstream can be assured that the dams are safe, he said.

Disaster Prevention and Mitigation Department director-general Chayaphon Thitisak said his department had already mobilised teams of officers and equipment to prevent and mitigate impacts from Bebinca.

They will work in the 58 provinces under risk of disaster, so that people in those areas can get proper assistance in the event of emergencies.