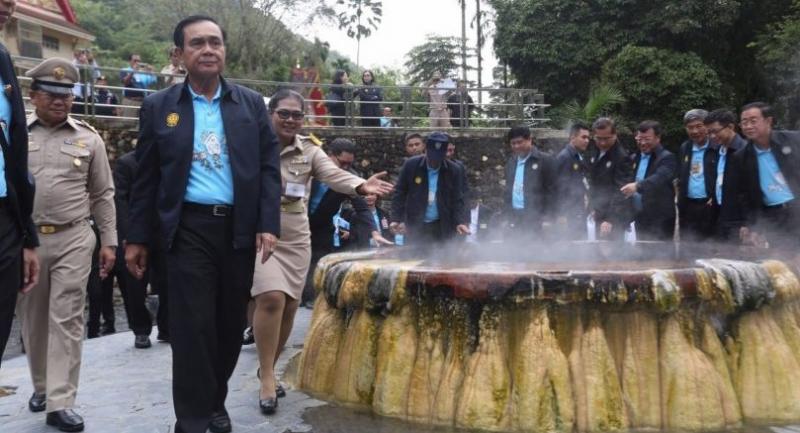 Prime Minister Prayut Chan-o-cha was in the southern province of Ranong on Monday to meet the locals before holding a mobile Cabinet meeting today to three local development projects.

Going to a province one day ahead is a usual ritual for the Prayut-led Cabinet, which is also seen as a means to boost his government’s popularity.

Ranong governor Jatupot Piyamputra said the province has put forward proposals for the construction of a four-lane road connecting Ranong with Chumpon, which will cost Bt2.9 billion; a Bt140-million gymnasium and sports rehab centre; and the construction of two reservoirs worth Bt300 million.

The province also wants the Cabinet to set a specific line between forested area and the city area, so land can be used legally for investment purposes.

Prayut and his ministers spent most of on Monday soaking in hot springs, doing yoga and visiting the Ranong port, which is one of the logistical spots along the Andaman sea.

There are plans to develop this seaside province into a trading and logistics hub in line with the Indonesia-Malaysia-Thailand Growth Triangle as well as economic cooperation in the Bay of Bengal region. Ranong, a tourist destination, is also pushing to promote alternative medical care with its hot springs, and is also focusing on the rehabilitation and recovery of natural maritime resources.

Prayut said one of his top priorities would be to give the province better transportation and land infrastructure in order to create “nationwide seamless connectivity”. The premier spent time talking to locals and even took selfies with them. Some were heard telling him that he “should stay PM for long without any election”, to which he only responded with a smile.