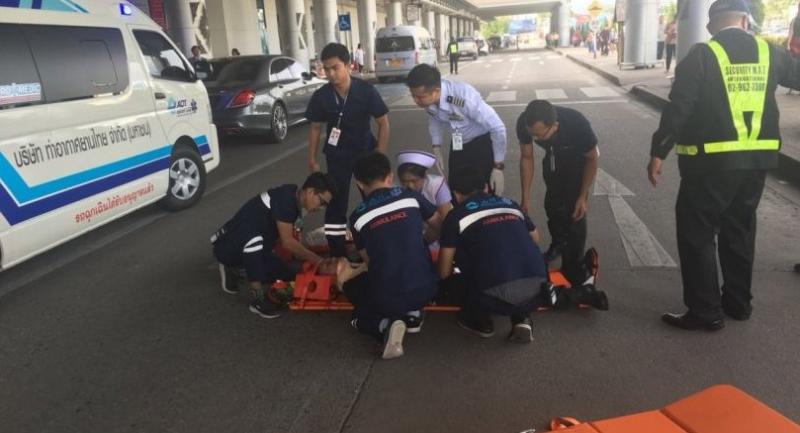 A 69-year-old woman with Alzheimer's crashed her pickup truck into a security officer at Chiang Mai International Airport on Monday evening, seriously injuring him.

Police were not certain whether the incident was an accident ¬- it happened immediately after the woman, Phattra Boonchaliew, was fined Bt400 for violating the one-hour parking limit. After the incident at 4.15pm Phattra, who loves in Muang district, got out of her pickup and seemed to remember nothing of what she’d done.

She was taken to the Phuping police station and a doctor hired to take care of her, Dol Jaiwai, showed police a hospital certificate showing that the woman was receiving treatment for two diseases, Alzheimer's and Parkinson's.

Her family told police they would be responsible for all the damage caused, as well as the medical expenses of the injured security officer, Watchara Chaiwong, an employee of MAI International, who suffered a broken right leg after being hit by Phattra's car. Security officers at the airport told police that Phattra saw her friend off at the airport and violated the one-hour parking limit in front of the passenger terminal so her pickup's wheel was locked.

She became irate when she saw her truck had been clamped and after paying the fine, drove her pickup into Watchara, who was directing traffic in the middle of the road in front of the passenger terminal. She then crashed into four vehicles, a Ford saloon, a van, a Mercedes Benz and a Toyota Fortuner.