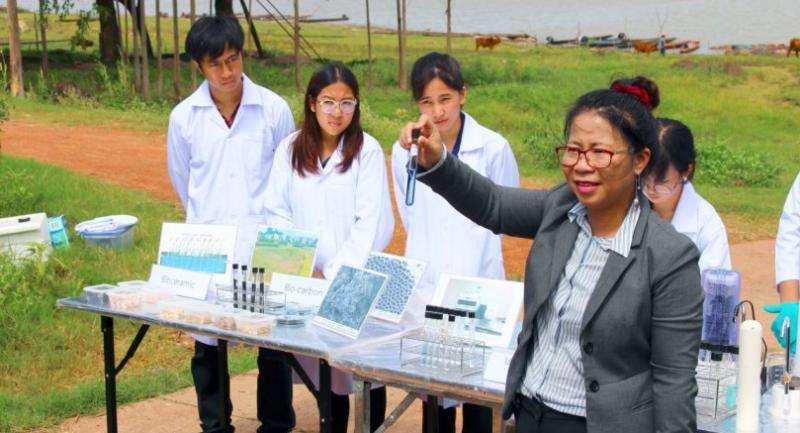 Assoc Professor Puangrat Kajitvichyanukul yesterday holds up a test tube containing a sample of tap water, which will be analysed to see if it is contaminated with paraquat. She was at a local water plant in Nong Bua Lamphu.

THE CONTAMINATION with agrichemicals in Nong Bua Lamphu remains severe according to the latest analysis by Naresuan University researchers, which found very high concentration of four prominent herbicides in soil, water, vegetables, fish and even in local tap water samples.

“We have found that paraquat, glyphosate, ametryn and atrazine have contaminated the environment in all six districts of Nong Bua Lamphu province,” said Assoc Professor Puangrat Kajitvichyanukul, head of the Centre of Excellence on Environmental Research and Innovation at the university’s Faculty of Engineering and the key researcher, yesterday.

She added that contamination in tap water proved that even the waterworks systems were not safe in many parts of the province.

Puangrat said these fresh findings provided further proof that prolonged, intensive use of herbicides, especially in sugar cane plantations, has caused very serious chemical contamination in the soil, water and food. This could eventually have an adverse effect on people’s health and highlights the urgent need for the agriculture sector to switch to organic farming, she said.

“Almost all samples of soil, water, vegetables and fish in this latest examination have equally high levels of herbicides as the previous test last year,” she said. “This result indicates that despite local people now being more aware of the need to avoid direct contact with contaminated water and soil to prevent necrotising fasciitis, the farmers still commonly use four-times the amount of herbicides than necessary.” Then there is the contaminated tap water. “The research team has found that the sources of water for tap-water production in many areas were severely polluted with farm chemicals,” Puangrat said. The water sources were situated in basins, into which contaminated water from farms is drained. The toxins then accumulate in the basins, she explained.

“Most tap-water production facilities are not designed to filter out the chemical contamination in the water. This combines with the fact that most facilities have long periods between cleaning, and results in tap water in some areas having even higher chemical concentration levels than before they were treated,” she explained.

She suggested that for short-term mitigation measures, the research team has developed ceramic and nano-carbon filters, which can eliminate chemicals from the water.

However, she urged farmers to avoid using herbicides and instead safer methods to kill weeds. They could switch to organic farming, she said, which will not only prevent health threats, but is really the best solution to the problem. The National Reform Committee on Public Health has demanded a total ban of paraquat, glyphosate and chlorpyrifos, three widely-used farm chemicals that are blamed for several adverse impacts, including being a threat to the human reproductive system.

“A study by Chulalongkorn University has found that the sexual organs of frogs in paddy fields have changed [because of exposure to the chemicals],” Dr Thiravat Hemachudha said yesterday in his capacity as a committee member.

He was speaking after his committee, which is chaired by Seree Tuchinda, held a meeting with the deputy chair of the National Reform Committee on Social Affairs, Anothai Rittiphanyawong.

The meeting took place in the absence of the representative from the National Reform Committee on Environmental Affairs, who failed to show up.

“At the meeting, it was agreed that these three chemicals should be banned,” Seree said.

He said the conclusion would be forwarded to Public Health Minister Dr Piyasakol Sakolsatayadorn, the National Reform Committee on the Environment and also to a panel appointed to look into the controversy. Chaired by Deputy Prime Minister Suwaphan Tanyuvardhana, the panel will convene its first meeting this afternoon.

He said the committees, had so far been limited to presenting information and opinions to the government and policymakers.

Thiravat said the civil society sector was prepared to go to court if the government ignored the adverse health impacts from farm chemicals.