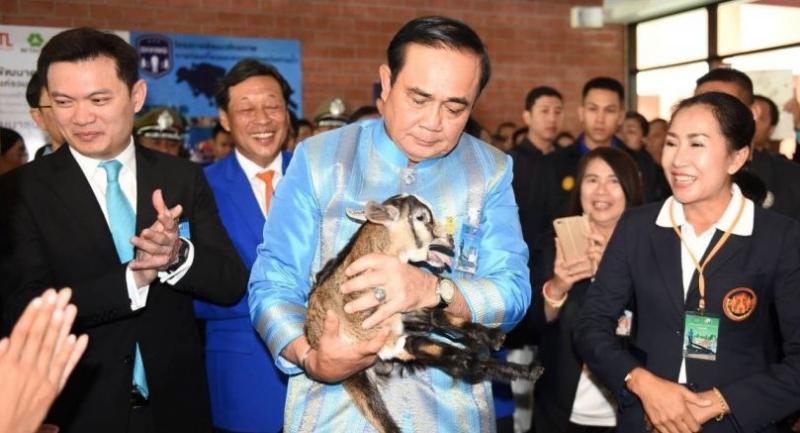 WHILE maintaining he wants a general election in February, Prime Minister Prayut Chan-o-cha yesterday claimed he had received support from many political parties to “stay longer” in power.

During his visit to Chumphon province for a mobile Cabinet meeting, the PM also told the southerners to not vote the same way again.

The South has been a political stronghold for the Democrat Party, which has won almost all – if not all – House seats in the 14 provinces of the region.

General Prayut, who also heads the ruling National Council for Peace and Order, has also previously told voters in the North and Northeast “not to make the same mistake again” during his visits to the regions. The North and Northeast were Pheu Thai Party strongholds in previous elections. Prayut has often blamed politicians for the country’s previous political conflicts.

The Cabinet yesterday convened its mobile meeting in the Chumphon campus of the King Mongkut’s Institute of Technology Ladkrabang, Prince of Chumphon campus. “In the future election, do not do the same [as you did in the past] again,” Prayut told the some 300 people gathered to greet him inside the campus. He suggested that voters base their decisions on the policy platforms of contesting parties and not on financial contributions made by local politicians at social functions.

“I have not decided which political party I will join. Many people support me. They want me to stay longer. I don’t know what to do,” Prayut told the gathering. The premier also reiterated his recent promise to make clear his political future next month.

He maintained yesterday that his latest trip to Ranong and Chumphon in the South was not aimed at wooing support.

“Agencies say different things, but in the end, adjustments will be needed. I am still firm on February,” he said. At a joint meeting with the Cabinet in Chumphon yesterday, representatives from the private sector proposed 34 development projects for the South with a combined budget price tag of Bt200 billion. The proposal was approved, said Wattana Thanasakcharoen, chairman of the Thai Chamber of Commerce’s southern economic development committee.

He said most of the projects were related to the development of infrastructure, particularly transport. These included a project to build a rail link between the eastern and western coasts of the southern peninsula.

The National Economic and Social Development Board (NESDB) yesterday also proposed to the Cabinet a project to develop a southern economic corridor.

In response to the private sector’s proposed development projects, the prime minister said yesterday that his Cabinet accepted the proposal for consideration.

“But we didn’t approve anything yet,” he said, adding that it was unlikely his Cabinet would approve all proposed projects, as they would need huge sums.

“We have to look at the budget and set the order of priorities for the projects. The focus will be on the southern economic corridor that is needed to create added value,” he said.

While meeting local residents, the PM said he just wanted encouragement from the people. He signalled “I love you” and drew loud applause from the crowd. Some in the crowd shouted, “We love Uncle Too”, calling Prayut by his nickname.

The junta leader thanked them and asked the locals to “think long-term for the country”. He also claimed that though he did not come to power through an election, his government had in four years achieved more than its elected predecessors did.