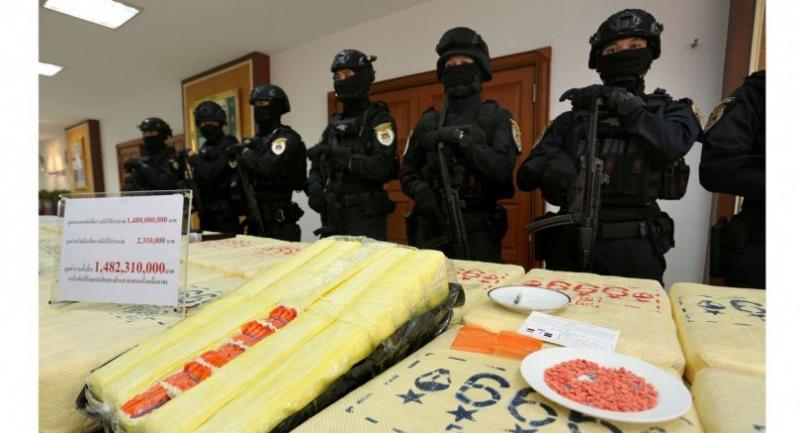 Chalermkiat told a press conference at the Narcotics Suppression Bureau (NSB) in Bangkok that Chiang Mai native Jirapat Wisutkhongkamon, 28, and two Nong Khai men – Pollawat Saibutr, 28, and Seksit Singcherdchuwong, 34 – had confessed to transporting narcotics and were charged with possessing drugs with the intent to sell. The arrests and seizure culminated a police investigation launched in July following a tip. Police learned that a drug gang based in the North, and with a connection to Lao drug traffickers, had transported illicit cargoes – hidden among farm produce – in a trailer truck from Chiang Rai to a warehouse in Ayutthaya’s Bang Pa-in district. The drugs were to be later distributed to retail dealers in Bangkok and nearby provinces.

Investigators, staking out the target warehouse in Chiang Rai’s Thoeng district, spotted the trailer truck –reportedly driven by Jirawat – departing the premises on August 16 morning and dispatched teams to tail it from a distance.

When the truck reached Bang Pa-in reportedly to collect fruit-filled boxes, Pollawat and Seksit showed up to take over the truck from Jirawat and drove back to the Chiang Rai warehouse, where the fruit boxes were reportedly emptied and the fruit replaced by drugs. The pair later drove the drug-laden container truck back to Bang Pa-in. Having established clear links between the two sites – which later were found to have been rented by the same person – and the suspects, and confirming the grounds for suspicions that the truck carried drugs, police then staked out the Asia Highway roadside spot where the three suspects met on August 18, and moved in to search them and uncover the drugs.

Police also conducted a search at the Chiang Rai warehouse the following day to search for more drugs, but did not find any.

NSB chief Lt-General Sommai Kongvisaisuk said police suspect the drugs were from a Lao drug trafficking gang with links to Hmong dealers in Chiang Rai’s Wiang Kaen district. The dealers are known to haul large loads of over 10 million pills per time.

Sommai said such large batches may not be distributed only within Thailand, but also transported through the South to reach a third country. He revealed that the gang had used a seal carrying the Customs Department’s logo to avoid officers’ opening and searching the container. Sommai also confirmed his previous statement in April that drug trafficker Surachai “Bung Ron” Ngernthongfoo, who had reportedly faked his own death two decades ago and underwent plastic surgery to avoid arrest, was still alive and living in Laos.

Sommai also reported on police success in drug busts since from 2016 until now. So far that they made arrests in 2,724 cases and seized over 189 million methamphetamine pills, 10,108.76 kilograms of crystal meth or “ice”, 866.17 kilograms of heroin, 182.37 kilograms of cocaine and 13,132.78 kilograms of dried marijuana. The confiscated drugs were estimated to be worth Bt1.313 billion.