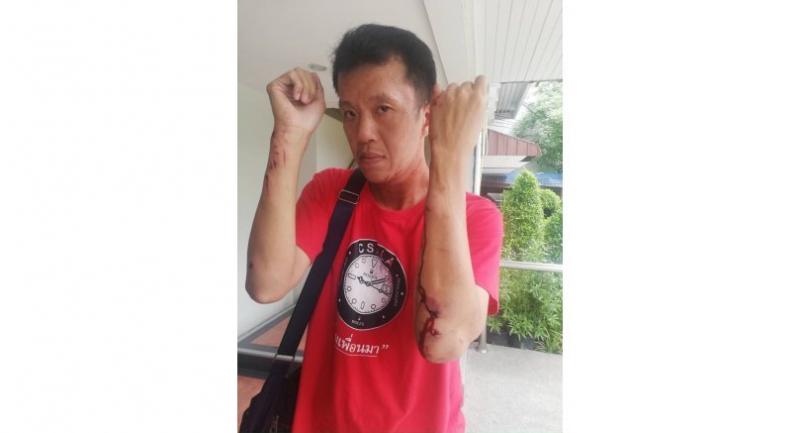 This attack comes a week after two mysterious men threw a bucket of fermented fish at the activist before fleeing on a motorcycle without a licence plate.

Ekachai said he was attacked by three men in Soi Lat Phrao 109 yesterday. Two of them initially tried to run him over with their motorcycle, also without a licence plate, and then strike him with a helmet. They missed both times. Then a third man intervened and succeeded in hitting the activist on his arms and neck with a large wooden stick.

Ekachai’s left arm is broken and needs to be put in a cast, fellow activist Nuttaa Mahattana, who took him to Nopparat Ratchathani Hospital, said.

Meanwhile, police officers at Lat Phrao Police Station have said the case will be investigated.

The anti-junta activist has made repeated attempts to get near the junta’s No 2, in a symbolic move against both Prawit and the ongoing investigation into his luxury watch collection since the scandal emerged last December.

Ekachai was stopped by officers every time he got close to Government House or Prawit’s residence.

He is also said to have faced occasional threats from different sources.

The investigation over what some have suggested could be the 72-year-old general’s irregular wealth and alleged concealment of assets has gone almost nowhere under the National Anti-Corruption Commission, whose key members serve in office through the approval of junta-appointed legislators.